Key-words
Theatre - Entertainment venue - Public area - Building Type - Site Type
Type of Operation
Excavation - Rescue excavation
Institution
B’ ΕΠΚΑ.
Toponym
Acharnes, Acharnae, Menidi
Linked Record
20072010
Report
Acharnai, 21 Salaminos Street. The B’ ΕΠΚΑ report on excavation of the ancient deme theatre (figs 1-2). The theatre had 11 rows of limestone seats in a semicircular arrangement. Part of the orchestra was found at a depth of 2.5 m. The koilon was founded on a natural slope. The seats are relatively narrow (0.22 to 0.4m). Between the orchestra and the proedria was a drainage channel. Above the tenth row of seats was part of the diazoma and the first step of the (probably wooden) epitheatro unfortunately badly damaged by ploughing. The orchestra seems horseshoe-shaped with a diameter of 13.5m. Its capacity is estimated at 1700-2000 spectators (not counting the epitheatro). The construction of the theatre is not yet accurately dated, but fourth-century BC inscriptions mentioning the theatre have previously been found.
Author
Robert PITT
Bibliographic reference(s)
http://www.yppo.gr/0/anaskafes/pdfs/B_EPKA.pdf, pp. 11-14.
Date of creation
2012-07-02 00:00:00
Last modification
2018-08-22 09:24:37
Picture(s) 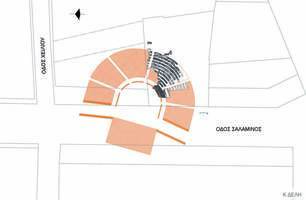