Key-words
Public building - Fortifications - Hydraulic installation - Public area - Road system/waterway
Type of Operation
Excavation - Rescue excavation
Institution
A’ ΕΠΚΑ.
Toponym
Athens Centre (Plaka, Monastiraki), Athènes Centre
Linked Record
2010
Report
Athens, Plaka. The Α’ ΕΠΚΑ reports the discovery at Kladou 6 of Roman-Late Roman bath complex founded on a large limestone wall of an older building (fig. 1). The remains are likely associated with Hadrian's Gymnasium, part of which was discovered in 1949 by the ASCSA east of the Stoa of Attalos. At a property at the junction of Adrianou 80 and Diogenous 3, a Justinianic gate of the Late Roman walls was revealed (fig. 2), with the remains of a rectangular tower (fig. 3) and section of the walls, as well as part of the post-Byzantine church of Panagia Krystalliotissas (fig. 4).
Under the Venizelon mansion at 96 Adrianou, part of the Late Roman fortifications were revealed (fig. 5), while in the courtyard of Dioskouron 5 lay part of the retaining wall of the ancient Street of the Tripods to a height of five courses (fig. 6). In the basement of the Aiolos (the first hotel in Athens, built in 1837) at the junction of Aiolou and Dexippou, the southeast corner of the Library of Hadrian came to light, as well as part of a large square tower or gate of the Late Roman walls of the city (fig. 7). Many architectural members and inscribed bases of various periods were recovered. At 4 Shelly St., successive layers of the Street of the Tripods were excavated along with its fourth-century BC retaining wall, and the foundations of two choregic monuments (figs. 8-9). At 16 Thrasyllou, part of the foundation of the Odeon of Pericles was revealed: the foundation was set on a terrace and the pottery from the foundation trench dates to the first half of the fifth century BC.
Excavation at Vyronos 2, to the south of the ancient Street of the Tripods, revealed the whole width of the street (5.9m) and its western retaining wall of conglomerate blocks (fig. 10). Various water and drainage systems, mainly clay pipes, were sunk into the road, the date of which extends to the Byzantine period. Excavations continue, focused on the area beyond the eastern boundary of the ancient road where the ancient road probably turned west towards the Theatre of Dionysos, with another route continuing to Dionysiou Areopagitou Street. In a trial trench at Bakchou 6, part of a Classical choregic monument was uncovered, along with layers of the ancient Street of the Tripods leading towards the Theatre of Dionysos (fig. 11).
Author
Robert PITT
Bibliographic reference(s)
http://www.yppo.gr/0/anaskafes/pdfs/A_EPKA.pdf, pp. 11-14.
Date of creation
2012-07-02 00:00:00
Last modification
2020-02-10 14:13:32
Picture(s) 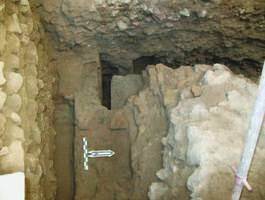 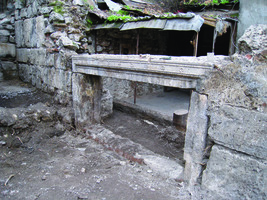 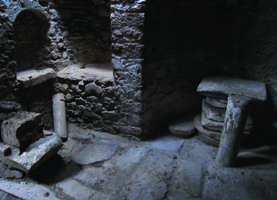 Fig. 6/ Athens, Plaka, 5 Dioskouron. Retaining wall of the Street of the Tripods. 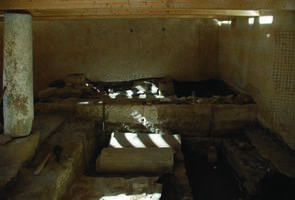 Fig. 7/ Athens, Plaka, 'Aiolos' hotel. View from the north of the southeast corner of the Library of Hadrian.

Fig. 8/ Athens, Plaka, 4 Shelly. Successive layers of the Street of the Tripods. 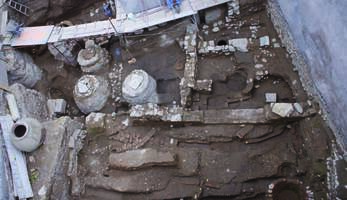 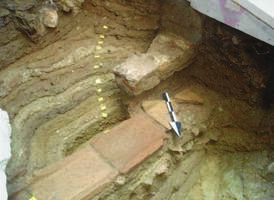 Fig. 11/ Athens, Plaka, 6 Vakchou. Road surfaces of the Street of the Tripods.