Key-words
Public area - Religious building - Altar - Sanctuary - Road system/waterway
Type of Operation
Excavation - Rescue excavation
Institution
A’ ΕΠΚΑ.
Toponym
Agora antique, Athenian Agora
Linked Record
2010
Report
Athens, Ancient Agora. Excavations ahead of the laying of a new railway line east of the Stoa of Zeus uncovered further remains of the altar of the Twelve Gods, the southwest corner of which lies within the archaeological site. Part of the paved floor and the krepis of the stone fence were revealed. Above the altar were the foundations of a Late Roman house, with a marble head of a herm built into its northeast corner. Between the Stoa of Zeus and the altar, part of the "West Road" is preserved, plus the fragmentary foundations of a fifth-century AD circular building, part of which was found in the northern part of the Agora by the ASCSA. East of the altar, superposed road layers of the Panathenaic Way were uncovered, and three blocks, perhaps from a starting system. In the eastern section of the road was a Byzantine silo and shallow square cuttings in the rock of unknown use.
Author
Robert PITT
Bibliographic reference(s)
http://www.yppo.gr/0/anaskafes/pdfs/A_EPKA.pdf, pp.7-8.
Date of creation
2012-07-02 00:00:00
Last modification
2020-02-17 11:09:10
Picture(s)

Fig. 1/ Athens, Ancient Agora. Altar of the 12 gods, part of the paving and stone krepis. 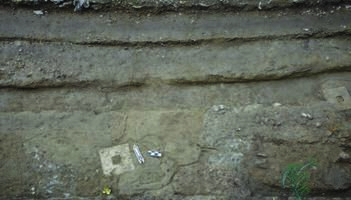