Key-words
Cistern - Hydraulic installation
Type of Operation
Excavation - Research excavation
Institution
DAI.
Toponym
Kerameikos Excavations, Céramique
Linked Record
1988198919901991199219931994199519971998199920002002200420052009201120122013201620192021
Report
Athens, Kerameikos. J. Stroszeck (DAI) reports on the 2011 season.
As part of a project to examine water management in ancient Athens, an underground water tank was investigated. This 28.3m-long tank (Fig. 1) consists of three bell-shaped cisterns connected by two corridors. The walls are made of a ring of stacked blocks of coarse-grained, porous yellow limestone. The bottoms of the cisterns are cut into the soft marl bedrock. The cistern floors each had a round, basin-shaped depression in the centre, where silt could settle. The entire system is lined with a hydraulic mortar.
Communicating passages, which considerably increase the cisterns’ capacity, improve the flow of air and water between the chambers, and give access for cleaning, occur in other tanks in Athens and Piraeus. The two passages are built quite differently: passage 1 is low, arched and curved (Fig. 2), while the 1.6m high passage 2, covered with flat limestone slabs opens into each cistern chamber via a pointed arch (Fig. 3). At the transition to cistern 16 is a plastered separation wall.
The construction of the cistern is connected to the reconstruction of the baths after 403 BC. The storage capacity of the system was drastically reduced in the second century BC, when cistern 15 and passage 2 were filled in (cisterns 16 and 17 remained in use): at the transition from passage 2 to cistern 16, a separation wall prevented the water from draining in this direction (Fig. 1). The cisterns were later converted into groundwater wells by digging through the silt basins. Finally, cisterns 16 and 17 went out of use following the Sullan destruction of the whole area.
Cisterns 16 and 17 were filled with rubble and modern debris. Both contained a few ancient marble fragments in the central depressions, including a fragment of an antefix probably from the roof of the Pompeion propylon. At the bottom of cistern 16, two full ladles were found from the last period of use in the early first century BC. Cistern 15 had been filled to the brim with excavation debris following earlier campaigns (Fig. 1). In the lower section of the fill was a stele with the inscription ΕΥΑΙΝΕΤΗ (Fig 5).
Author
Robert PITT
Bibliographic reference(s)
Unpublished Report.
Date of creation
2012-07-02 00:00:00
Last modification
2021-08-27 08:20:35
Picture(s) 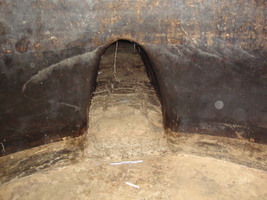 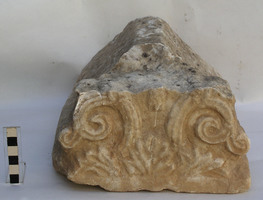