Key-words
Bath - Building Type
Type of Operation
Excavation
Institution
22nd EBA
Toponym
Nafpaktos
Linked Record
2010
Report
Naupaktos, Plastira Street. (Figs 1-3). The 22nd EBA reports the discovery of the southern part of a Byzantine public bath which occupied the entire excavation plot, continuing east under Plastira Street and north into the property of the brothers I. Perati.
In the east part of the complex was a cistern, and immediately to the east of it the caldarium and hypocaust with its square brick pillars. The wall which linked the caldarium with the cistern had two brick arched openings. Το caldarium had two interconnecting rooms, a floor paved with large slabs of off-white schist, hot air channels within the walls, and low brick built benches around the walls covered in plaster to which marble revetments had evidently been fixed. A doorway in the northwest corner of the second room of the caldarium led into the apodyterium which extends beneath Plastira Street to the east. The frigidarium continues below an old house. The open-air part of the bath occupied the southern part of the plot. A built water channel ran west-east: many square grey schist flooring slabs were also found. Finds indicate that the bath remained in use for a very long time: a large quantity of Byzantine glazed pottery was found, with post-Byzantine, 15th- to 17th-century wares in the upper levels.
Author
Robert PITT
Bibliographic reference(s)
http://www.yppo.gr/0/anaskafes/pdfs/22_EBA.pdf, pp. 69-70.
Date of creation
2012-07-01 00:00:00
Last modification
2018-08-22 09:24:36
Picture(s) 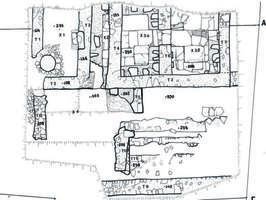 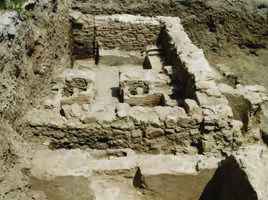 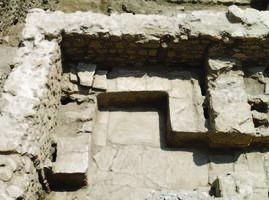