Key-words
Chapel - Temple - Religious building - Sanctuary - Building Type - Site Type
Type of Operation
Excavation
Institution
8th EBA
Toponym
Profitis Ilias
Linked Record
2004
Report
Prophitis Ilias, Kechropoula (anc. Palairos). P. Dimitrakopoulou (8th EBA) reports the discovery, on a plateau on the top of the hill of Prophitis Ilias, of an Archaic-Classical Doric temple with a long altar at the east end and a Byzantine church to the south of it. The church, which has a single nave with a small apse at the east end and a west entrance, is built of spolia from the temple. The rooftiles found in the area are probably post-Byzantine. The modern chapel of Prophitis Ilias almost touches the west side of the Byzantine church. All around the plateau are remains of walls and portable finds dating from the Archaic to Byzantine periods (Byzantine finds are confined to pithoi and tiles/bricks).
Author
Robert PITT
Bibliographic reference(s)
P. Dimitrakopoulou, ADelt 56-59 (2001-2004) B2, 119-120.
Date of creation
2012-07-01 00:00:00
Last modification
2018-08-22 09:24:36
Picture(s) 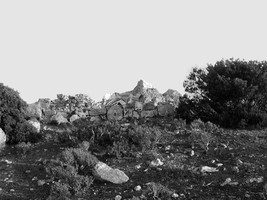