Key-words
Peribolos - Tomb - Dress and personal ornament - Architectural revetments - Sculpture - Cemetery - Road system/waterway - Building Type - Find Type - Site Type
Type of Operation
Excavation - Rescue excavation
Institution
Ministry of Culture and Tourism: Β'  ΕΠΚΑ
Toponym
Acharnes, Acharnae, Menidi
Linked Record
2004
Report
Lykotrypa. Konstantinoupoleos Street and Amyntaiou Alley. In the course of works for the suburban railway, M. Platonos (Β’ ΕΠΚΑ) investigated an ancient road, the wall of a funerary peribolos, and tombs (mostly pyres) of the Classical period (Fig. 1).
The road (27.3m long and 3m wide) ran northwest-southeast: it had two retaining walls and at least five successive surfaces with wheel ruts in the lower three. The road was used from the first half of the sixth century BC until the Late Roman and Byzantine periods. In the north retaining wall was part of a marble doric column base, while on the southwest side of the road within the road fill was part of a funerary relief stele of the last quarter of the fifth century BC (Fig. 2).
To the southeast of the road was a funerary peribolos 12m long with walls of large rectangular conglomerate blocks preserved in places to two courses high. Within the peribolos were many fragments of marble funerary stelai, part of a kioniskos and the base of a marble lekythos, as well as pottery (mostly aryballoid lekythoi), dating the peribolos to the end of the fifth or the first quarter of the fourth century BC.
Twenty nine tombs were found within the peribolos, plus another in the northwest part of the road: the majority was damaged. Twenty two were pyres, two were limestone sarcophagi, two tile graves, and three enchytrismoi (one of the Late Roman period), while one pit grave of the same period was opened in the northwest part of the road. Eighteen of the 28 tombs were oriented northeast-southwest, and 10 northwest-southeast.
The majority of the pyres had an air duct which crossed along the length of the bottom and continued vertically to the narrow sides of the pyre pit.
The two tile graves were close to the walls of the peribolos but damaged; grave 24 yielded bone remains and part of an alabastron of the first quarter of the fourth century BC.
Two of the enchytrismoi were in poorly preserved pithoi, one dating to the second quarter of the fifth century BC. A third was without bone or goods, but the urn (a pithos) is Late Roman.
Pit grave 5, a small elliptical pit, contained a bronze coin and a banded prochous of the late fourth-early fifth century AD.
Of the limestone sarcophagi, the larger (3) was damaged. It had a pedimental lid, and inside the bones of the skull with a metal fibula probably of the first quarter of the fourth century BC. The smaller sarcophagus (7) was also damaged (Fig. 3): no bones remained and only one fragmentary alabastron and a mouth of another survive, from the first quarter of the fourth century BC.
Of the pyres, grave 8 contained three black-figure lekythoi of the Group of Vatican G52 with athletic representations (Figs 4-6), a black-glaze exaleiptron, a black-glaze Type C cup and a black-figure skyphos of the Group of the Oxford Lid with sirens on one side and a lion wrestling a bull on the other. The tomb dates to the first quarter of the sixth century BC. Finds from other pyres include in particular black-glaze and black-figure lekythoi (Figs 7,8). Fig. 2/ Lykotrypa, Konstantinoupoleos Street and Amyntaiou Alley: the road and fallen slabs from the west side of the funerary peribolos. 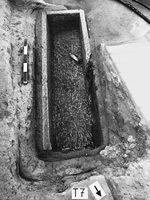