Prehistoric cemetery:
Further investigation of a previously known large chamber tomb on the Vorylla property was pursued in 2001 and 2002 (when bone was collected from the floor, along with two undecorated Minoan cups, and a lead figurine).
At O.T. 206 and 207 and within Mesolongiou Street at its junction with Nikopoleos Street to the north, five chamber tombs and five pit graves were found in 2001 (with finds including four seal stones). Work on O.T. 207 was completed in 2002 with the discovery of a small chamber tomb and two pit graves.
Investigation of the Tsianti plot (formerly Poulopoulou property, 15 Aiolou Street), where a chamber tomb and four pit graves had previously been found, revealed other pit graves with cover slabs.
In 2003, a small chamber tomb and three pit graves were found near to the Vorylla plot on Mesolongiou Street (Lymperopoulou property). At the southwest corner, near the start of the dromos of the large tomb, were skeletal remains of a large and a small animal (horses?). Work on the electricity grid along Mesolongiou Street uncovered two Mycenaean pit graves,
Historical periods:

3 Kykladon Street (Kontaxi property): in 2001, a Late Geometric-fifth-century BC cemetery was revealed. This included a looted limestone sarcophagus, a grave with six Corinthian cover tiles containing lekythoi of the second half of the fifth-century, and two Early Archaic enchytrismoi. Part of a Roman building was found east of the cemetery on Kykladon Street. The continuation of this cemetery was found on the neighbouring Kotsia property in 2003. A limestone sarcophagus, a marble urn, and nine pit graves with cremations all date to the Classical period. The sarcophagus contained the skeleton of a woman and four small pots, a bronze mirror, and a bronze lamp stand with decoration of a Nike (Fig. 1).
In 2002, road works on Anatolis Street, uncovered a damaged limestone sarcophagus containing a late fifth-century red-figure pyxis with the head of a wreathed youth (Apollo?), a lekanis, and a bronze mirror. An enchytrismos in a large pithos was accompanied by a clay figurine of an enthroned female with preserved colour (Fig. 2), three lekythoi, and a spindle whorl. At the west of the south tomb was a large square limestone container holding a bronze urn.

At the junction of Kyprou and Amaliados Streets (property of Perivallontikis A.E.), part of an ancient road (15m long and 3m wide, oriented southwest-northeast) was found in 2002 (Fig. 3). This is the same road found previously in neighbouring plots on Erythron and Kyprou Streets, and in the Nikolaou property (Verginas Road). Beneath the road was a small pot perhaps from a Late Geometric grave. Around 30m east on Amaliados Street were the remains of an ancient building, probably a farmhouse.
The westwards continuation of this road was found in 2003 at the junction of Iphaistou and Verginas Streets (Spanou property). This was at least 3m wide, and at the east appears to form a corner with another road. It contained Archaic ceramics. At the southwest corner was a small part of a Classical building with two phases. The same road was also found on Kyprou Street along its southeast junction with Erythron Street. Here the lowest level contained Geometric pottery. 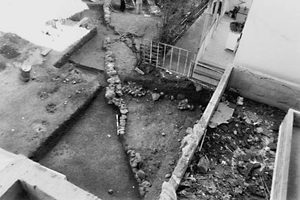