Key-words
Tomb - Inscription - Dress and personal ornament - Cemetery
Type of Operation
Excavation - Rescue excavation
Institution
Ministry of Culture and Tourism: Γ'  ΕΠΚΑ
Toponym
Athènes, Athens
Linked Record
2004
Report
Plateia Kotzia. O. Zachariadou (Γ’ ΕΠΚΑ) reports on works for the display of an area where excavation has previously been undertaken for the construction of an underground car park in Plateia Dimarcheiou in 1985-1988, and additionally in 1998-1999. Three ancient roads were discovered at that time, plus a cemetery dating from the Early Geometric (ninth century BC) until the Roman period (third century AD), a large complex of Late Roman pottery workshops (end third-fourth century AD), and many residential remains. This area is immediately outside the fortifications of Classical Athens, parts of which were found during the building of the National Bank and in the pedestrian area of Aiolou street.
In 2003-2004 maintenance works began for the display of the area (Fig. 1), during which eight further tombs were revealed, bringing the total number to 680. Tomb 673 was an enchytrismos of a small child with no goods; 674 was a limestone sarcophagus containing an alabastron and an aryballoid lekythos; 675 a tile grave with the deceased supine accompanied by three unguentaria (two terracotta and one glass); 676 a pit grave dug into schist with the skeleton supine; 677 a fragmentary tile grave; 678 a pyre with five unguentaria; 679 an inurned cremation; 680 a tile grave with a supine skeleton, three unguentaria, a pyxis with lid, a bronze mirror, and bronze and bone toilet equipment.
From the east side of the square came a funerary kioniskos with a relief of a loutrophoros and the inscription: ΕΡΜΑΓΟΡΑΣ ΤΙΜΩΝΟΣ ΕΡΜΕΙΟΣ ΓΟΝΩΔΕ ΠΟΜΠΙΔΟΥ ΑΘΜΟΝΕΩΣ.
Author
Robert PITT
Bibliographic reference(s)
AD 56-59 (2001-2004) Chr., 289.
Date of creation
2011-06-28 00:00:00
Last modification
2020-02-10 14:53:35
Picture(s) 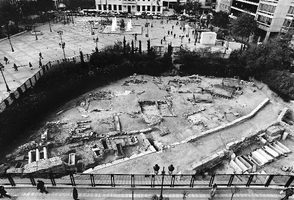