Key-words
Fortifications - Cistern - Tomb - Hydraulic installation
Type of Operation
Excavation - Rescue excavation
Institution
Ministry of Culture and Tourism: Γ'  ΕΠΚΑ
Toponym
Athens Centre (Plaka, Monastiraki), Athènes Centre
Linked Record
2004
Report
Pedestrianization of Aiolou Street. O. Zachariadou (Γ’ ΕΠΚΑ) reports the discovery of the west continuation of the ancient Athenian fortifications, which were investigated in 1973-4 on National Bank property at the junction of Aiolou and Sophokleos. All the elements of the fortification were revealed: the wall, its inner circuit road, the proteichisma, the ditch with its retaining walls, and the outer circuit road (Fig. 1).
The wall (4.1m long, 0.4-0.56m wide) was damaged by later building: only one course is preserved of three limestone rectangular blocks oriented east-west and founded in the schist bedrock.
The inner circuit road was found parallel to, and just north of the wall. Preserved to a length of 3.4m and a width of 8.6m, three road surfaces were found damaged by several pits and a well, with two Roman terracotta pipes and a robbed tomb in the top surface.
The proteichisma, 3.38m long, and preserved to five courses (1.3-2.2m high) of conglomerate blocks founded in schist, lay 3.1m north of the wall.
The ditch and its retaining wall lay 9.91-10.12m north of the proteichisma. Inside the ditch was a Late Roman cistern.
The outer circuit road north of the ditch and oriented east-west, was preserved to a length of 3.18m and a width of 2.37m. It was bounded to the south by a ditch, while the north retaining wall or bank was not found.
Author
Robert PITT
Bibliographic reference(s)
AD 56-59 (2001-2004) Chr., 268.
Date of creation
2011-06-28 00:00:00
Last modification
2020-02-11 14:38:34
Picture(s) 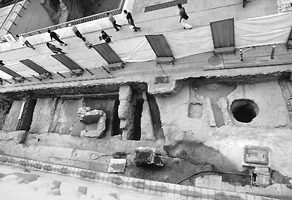