Key-words
Residence - Numismatics - Mosaic - Sculpture
Type of Operation
Excavation - Rescue excavation
Institution
Ministry of Culture and Tourism: Γ' ΕΠΚΑ
Toponym
Athens Centre (Plaka, Monastiraki), Athènes Centre
Linked Record
2003
Report
97 Adrianou Street. I. Tsirigoti-Drakotou (Γ’ ΕΠΚΑ) reports the discovery on bedrock (at a depth of 4.5m) of a probable urban villa of the post-Herulian period. This large building (internal dimension 13.4 x 6.8m) includes a fourth-century AD mosaic floor which continues under the neighbouring property on Adrianou 99 (Fig. 1). This floor is defined by an outer band, along the length of the walls, with an alternating system of lozenges, and an inner decorated with maeanders. The main body of the mosaic features square blocks with circles and semicircles, linear and figurative designs (pottery, fruit, human figures, perhaps the months). The plan of the hall, defined by walls of rectangular blocks, is obscured by later building interventions: there is at least a second room, not clearly defined but with a floor of marble and a well (0.53m in diameter).
Finds include 26 coins in a hoard and various sculptural fragments, including a half-worked head, a marble wing (of an Eros?), and the palm of a statue carrying a mesomphalos phiale.
Author
Robert PITT
Bibliographic reference(s)
AD 56-59 (2001-2004) Chr., 240-241.
Date of creation
2011-06-23 00:00:00
Last modification
2020-02-12 09:34:34
Picture(s) 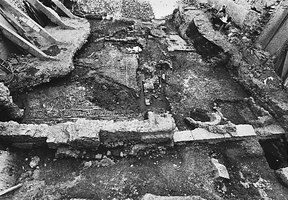