Key-words
Fortifications - Inscription - Architectural revetments
Type of Operation
Excavation - Rescue excavation
Institution
Ministry of Culture and Tourism: Γ' ΕΠΚΑ
Toponym
Athens Centre (Plaka, Monastiraki), Athènes Centre
Linked Record
2003
Report
12 and 14 Dipylou Street. I. Tsirigoti-Drakotou (Γ’ ΕΠΚΑ) reports on excavation during the renovation of two listed buildings for the Islamic branch of the Benaki Museum, which revealed part of the Athenian proteichisma of the fourth century BC, with additions during the reign of Valerian (third century AD).
The fortification wall was revealed for a length of 12m on Dipylou 14 and 20m on Dipylou 12, at its highest preserved to 13 courses, oriented east-west, of rectangular conglomerate and square limestone blocks (Figs 1-3). The ditch outside the wall was 9m wide and defined by a wall of large blocks with smaller irregular stones. The fill contained a large amount of pottery of various periods, wood, ash, stone, tile, etc.
The ditch was filled in the first century AD as part of the cleaning operation after the Sullan sack of 86 BC. Seven tombs were dug into the ditch in the first-second centuries AD.
Two arms of a wall in the area of the ditch formed part of a Justianic tower found also in previous excavations.
Within the proteichisma and inside the boundaries of the excavation were parts of the fourth-century road which ran around the city above the walls, connecting the various suburbs. On its surface were wheel ruts 1.44m apart. Below the Roman fill were five road layers dating to the fourth century BC. The road was destroyed and essentially removed by two struts of the proteichisma which probably belong to the period of repair. The proteichisma was converted during the reign of Valerian into a wall ca. 3m wide, defined to the north by the same proteichisma and to the south by a wall of conglomerate blocks (Fig. 4). The space between the walls was filled with stones, tiles, large marble architectural members, as well as fragments of an epistyle, part of a third-century BC inscribed funerary table, and a fifth-century casualty list with 80 names of the tribe Erechtheis (Fig. 5).
A small part of the Valerian wall was revealed, continuing to the east.
Author
Robert PITT
Bibliographic reference(s)
AD 56-59 (2001-2004) Chr., 237-239.
Date of creation
2011-06-23 00:00:00
Last modification
2020-02-12 09:35:47
Picture(s) 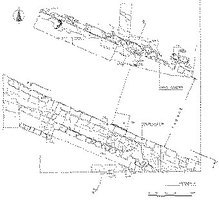 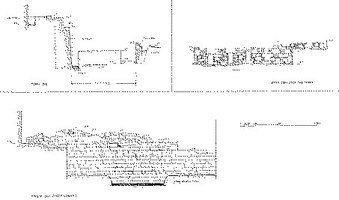 Fig. 2/ 12 and 14 Dipylou: section and elevation of the fortification. 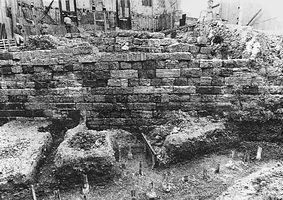