Key-words
Pipe/drain - Hydraulic installation
Type of Operation
Excavation - Rescue excavation
Institution
Ministry of Culture and Tourism: Γ' ΕΠΚΑ
Toponym
Athens East (Olympieion, National Gardens, etc.)
Linked Record
2002
Report
4-6 K. Neri Street (property of G. Kokkinaki) and the junction of Tyrtaiou 2 and K. Neri 2 (property of V. Papaioannou). A. Kokoliou (Γ’ ΕΠΚΑ) reports the discovery of part of a Roman aqueduct, sections of which were previously revealed in the surrounding area (Fig. 1). To the south of these plots, part of the Hadrianic aqueduct was uncovered for a length of 40m, oriented northeast-southwest and cut into bedrock.
Two channels were found on K. Neri 4-6; one was damaged, but the other, oriented northeast-southwest and cut into the rock, was probably the continuation of the pipes previously found at Neri 11/Kokkini and Kallirrois 5, and at Perraivou and Kokkini. North of this channel was a rectangular pit.
A wall was found at the centre of the property, and to its north a rock-cut tunnel oriented west-southeast.
A 28m long continuation of the Roman aqueduct was identified at the junction of Tyrtaiou 2 and Neri 2.
Author
Robert PITT
Bibliographic reference(s)
AD 56-59 (2001-2004) Chr., 226-227.
Date of creation
2011-06-23 00:00:00
Last modification
2020-02-12 10:48:57
Picture(s) 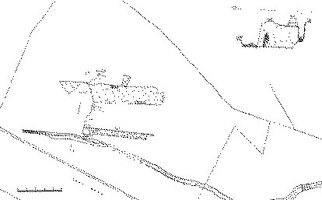