Key-words
Tomb - Inscription - Dress and personal ornament - Sculpture - Cemetery - Sanctuary
Type of Operation
Excavation - Rescue excavation
Institution
Ministry of Culture and Tourism: Γ' ΕΠΚΑ
Toponym
Athens South (Makrygianni, Koukaki, Kynosarges, Mets), Athènes centre-Sud
Linked Record
20012001 (1)2010
Report
Diamantopoulou 10 (Dinopoulou property). Th. Iliopoulos (Γ’ ΕΠΚΑ) reports on investigation in this 331m2 property of the Kynosarges cemetery (Fig. 1), considering also its proximity to the large Roman building known as the Hadrianic Gymnasium. The most important Classical core of the cemetery was revealed, numbering 159 tombs. Apart from a few Early Helladic sherds, the oldest burial is a Geometric enchytrismos in an amphora (T21). Many tombs date around the middle of the sixth century, but the use of the cemetery peaked in the fifth and fourth centuries BC. The burial customs and the types of graves are identical with those of other, better known Athenian cemeteries: deep pits dug into schist, limestone sarcophagi, covered tile graves, pyres (some free, others in pits), small clay larnakes with lids for child burials, enchytrismoi etc. In the Hellenistic and Roman periods the number of graves declines, while the latest tombs date around the first-second centuries AD.
An intact horos of the fifth century BC (1.05m high) inscribed [Δι]ὸς [Π]ολιέως ἄβατον indicates the presence in the area of a sanctuary.
The report describes all 159 graves and their goods in detail, from which we note:
‘The tomb with the offering trench’: an elongated narrow trench (l. 3.5, w. 0.3-0.4m) containing a dense accumulation of pottery showing signs of burning. It was disturbed in the second century BC by the simple burial T31 almost at its centre. Red-figure pottery includes: two type 1 lebes gamikoi and two other smaller type 2 examples; two large hydria; a pyxis with depictions of the nine Muses, each named (Fig. 2), and a smaller pyxis with a funerary scene. Among many fragments of white lekythoi was one with a standing female figure by a funerary stele.
Black glaze pottery included a large kylix; a Corinthian type A skyphos; two lekythoid-aryballoi; four black glazed phialai and two lekanes with lids.
Small finds include two small identical bone studs, two bone rings, and a black-glazed pyramidal loomweight.
The mound adjacent to the offering pit (ca. 5 x 2m) was made of river stones and material probably from a tomb or tombs. On the surface was a small marble lion (preserved height 0.47, length 0.48m), as well as a pair of standing naked lead figures (0.12m high) inscribed on the chest of the male Σημιάδης καταδέδεται, and of the female Μυννὼ καταδέδεται.
The many finds from the cemetery include tens of lekythoi of the workshop of the Megaira Painter; nine lead katadesmoi folded and pierced with nails; five or six Early Classical standing female figurines; the bronze panelling of a box; and gold leaf, probably from a funerary wreath.
Author
Robert PITT
Bibliographic reference(s)
AD 56-59 (2001-2004) Chr., 208-14.
Date of creation
2011-06-21 00:00:00
Last modification
2020-02-13 09:51:23
Picture(s) 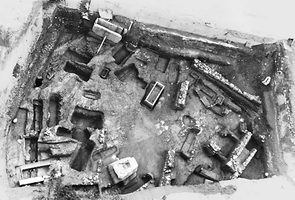 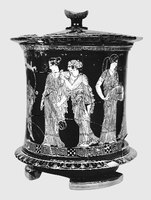