Key-words
Fortifications - Inscription - Sculpture
Type of Operation
Excavation - Rescue excavation
Institution
Ministry of Culture and Tourism:  Α' ΕΠΚΑ
Toponym
Athens Centre (Plaka, Monastiraki), Athènes Centre
Linked Record
2003
Report
Plaka. V. Vasilopoulou (Α’ ΕΠΚΑ) reports on the following works conducted in 2003.
Excavation at Adrianou 100 (property of K. Bitzani) revealed a fragmentary relief depicting a draped figure. From Kladou 8 and Krevvata (property of A. Papalaskari), came part of a circular relief depicting a horse. At Panos 17 (property of N. Nikolopoulou) a fragment of a relief with a clothed figure was found, plus part of an Ionic base with plinth, and part of a funerary kioniskos with the inscription ---ΣΥ|ΘΥΓΑΤΗΡ. From Tholou 16 (Ministry property) came part of an inscribed funerary kioniskos, a section of an altar, two fragments of Ionic bases and part of an epistyle. Spolia from Medieval or Ottoman walls at Thrasyboulou 9 (property of K. Taranto) included 8 architectural members and 4 sculptures.
Trenches for a natural gas line at the junction of Plessa and Kyrristou produced a marble plaque with an Ionic cyma, part of an unfluted column, and a fragmentary base with cyma moulding.
Excavation ahead of building work at Adrianou 92 (property of the Metropolitan of Athens) revealed a section (3.7m long, 4.3m maximum width, 2.9m high) of the north side of the Late Roman walls, built in final quarter of the third century AD after the Herulian invasion (Figs 1,2). A cistern was built during a second phase of construction. The wall is preserved to one course on its north face and four on its east, is oriented east-west, and is built of massive limestone blocks with connecting mortar. Spolia included an inscribed funerary stele with palmette, and a relief depicting Athena with a Gorgoneion (0.58 preserved height, 0.35 wide, 0.21m thick). In the southern part of the plot was a Late Byzantine wall (Figs 1,3).
Author
Robert PITT
Bibliographic reference(s)
AD 56-59 (2001-2004) Chr., 167-169.
Date of creation
2011-06-19 00:00:00
Last modification
2020-02-17 10:34:11
Picture(s)

Fig. 1/ 92 Adrianou Street: plan and section of part of the north side of the Late Roman fortification wall. 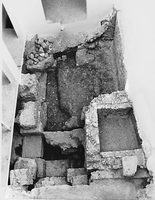 Fig. 2/ 92 Adrianou Street: part of the north side of the Late Roman wall plus cistern. 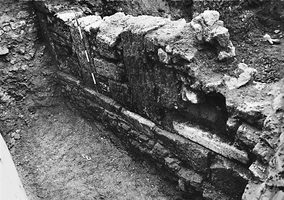