Key-words
Bath - Pipe/drain - Cistern - Well - Tomb - Figurine - Lamp - Numismatics - Mosaic - Sculpture - Metal - Stone - Hydraulic installation - Public area - Domestic space - Production/extraction site - Road system/waterway
Type of Operation
Excavation - Rescue excavation
Institution
Ministry of Culture and Tourism: Α' ΕΠΚΑ
Toponym
Athens South (Makrygianni, Koukaki, Kynosarges, Mets), Athènes centre-Sud
Linked Record
19841986199019961997199819991999 (1)20002004
Report
Makrigianni. New Acropolis Museum plot. S. Eleftheratou (Α’ ΕΠΚΑ) reports on excavation in various parts of the site (Fig. 1).
In the southwest section of the plot (the area of the demolished properties on Hatzichristou Street), discoveries include the western continuation of Road I and the end of the buildings which lie to the north of it, the junction with of Roads I and II, and a new multi-phase building (House Θ) which lies at that junction. House Θ was founded towards the end of the fifth century BC, and contains a well-preserved andron with a mosaic floor of marble and pebbles in separated panels (Fig. 2). The house remained in use over a long period and underwent many repairs and alterations. In the Hellenistic period, a workshop was established in the courtyard with a system of three connecting rectangular tanks, arranged on different levels. A pipe drained water into an underground cistern, while the unclean or surplus water was removed to Road II through a built drainage channel. The workshop was probably a fullery or washery of some form. In the second century AD the house was extended towards the east. Its rooms were arranged around an interior courtyard with a floor of marble gravel. The same flooring was also laid in a room to the northwest which was consolidated with its neighbour during the third century by the removal of the party wall. Above this wall was a platform with a base of an ionic column which held up the roof (Fig. 3). The room maintained this arrangement until its final destruction at the end of the third century. A series of seven rooms from the final phase of the house was much disturbed during modern construction (Figs 4,5). These had walls of small and medium sized stones, older members in secondary use, and a series of bricks with strong connecting mortar.
Fragmentary remains in the south and southeast section of the plot were removed for the construction of the basements of the museum. Removal of the surfaces of the ancient Road III revealed that it was in use from the end of the fourth century BC until the end of the third century AD. Sections of the floor of an andron of a Classical house were excavated to the east of the road. A section of the ancient Road I was also removed: this dated to the end of the fifth century BC. Northeast of the road lay remains of Geometric and then successive Hellenistic to Early Christian facilities, four Protogeometric tombs, and part of a Classical drain known from previous investigation.
Removal of the remains of the Roman House A enabled exploration of the preceding marble worker’s shop of the first century BC to first century AD. This was primarily an outdoor establishment with a few sheltered areas to the south. Among the layers of chips and marble dust were a considerable number of fragments of half-worked sculptures (Fig. 6) and pottery, as well as a large number of lead sheets, probably from tools. Further south was a pit for casting bronze statues, with the remains of a clay mould used for successive castings in situ (Fig. 7).
With a view to the conservation and display of the excavations within the museum area, a series of works focused on chronological and interpretive problems outstanding from earlier studies. The retaining embankments were restored to the level of Roads I and II, and large breaches, ancient and modern, were filled. To the east of Road II, a wall of the Early Christian period was found in the area of the small Roman West Baths. The boundaries of the frigidarium and of the thermal areas (caldarium and tepidarium), as well as the praefurnium were better identified. To the west of Road II, the western boundaries of the Classical House M were clarified and the underlying archaeological levels excavated to bedrock. Part of a Middle Helladic room was discovered. To the north, remains of the Middle Byzantine installations, as well as the Late Roman and Early Christian levels, were removed. Fragments of house walls of the Classical period (House K) were uncovered, and the oldest layout of the road was dated to the end of the fifth century BC.
Ancient remains were removed for the construction of the basements of the museum, and excavation of the bedrock begun. Twenty ancient wells and 9 cisterns of various periods were discovered, all cut into the rock. Similarly, in the areas where the supporting columns of the museum were to be set, archaeological remains were recorded before removal and the area excavated to bedrock (Fig. 8).
A great number of portable finds were discovered during the whole excavation; pottery and utensils, lamps, fragments of terracotta figurines, fragments of sculpture and architectural members, bronze coins, and metal objects. During these final years of work, some 1573 portable finds were recorded, ceramic groups examined and dated, 2344 portable finds preserved, and wall paintings and floors mounted and preserved.
Author
Robert PITT
Bibliographic reference(s)
AD 56-59 (2001-2004) Chr., 147-152.
Date of creation
2011-06-19 00:00:00
Last modification
2021-05-04 07:28:08
Picture(s) 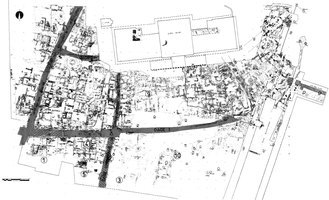 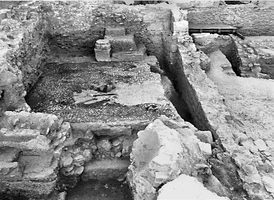 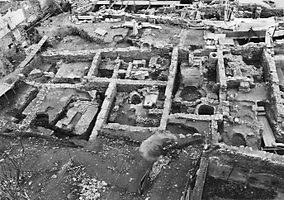 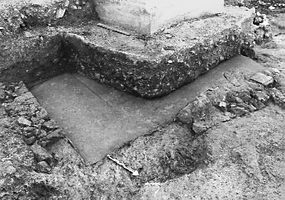 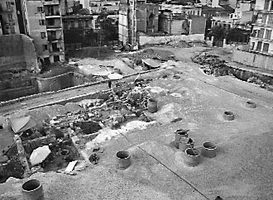