Key-words
Fortifications - Well - Residence - Tomb - Figurine - Hydraulic installation - Production/extraction site - Sanctuary - Territory - Building Type - Find Type - Site Type
Type of Operation
Excavation - Research excavation
Institution
University of Ioannina
Toponym
Salamina, Salamis
Linked Record
2004200720082008 (1)20092010
Report
Salamis, Kanakia. Y. Lolos (Ioannina) reports on work conducted in 2009 on and around the Mycenaean acropolis.
On the north side of building Γ, the partially set back area west of the prothalamos of the concealed north entrance to the complex was investigated. In its southeast corner was a small rectangular paved surface or low exedra, and in the southwest, a worked trapezoidal block, perhaps a seat, against the west wall (Fig. 1). Part of a room was investigated in the east extension of the north wing of building Γ, on the north side of the long corridor. This contained a thin layer of fill over the floor, on which lay LH IIIB-C sherds and a variety of stone tools of an earlier period. A permanent work surface in the southeast corner suggests that this may be a workshop.
On the plateau southeast of the Mycenaean acropolis (Pyrgiakoni), documentation of architectural and other visible remains inside the Hellenistic temenos continued. Ca. 15m southwest of the Mycenaean tumulus, a well (external diameter 4.9m) was fully excavated to a depth of 2m. It had a narrow descent cut into its east side (Fig. 2). The well, which was dug at the site of a natural basin and spring, probably served the neighbouring sanctuary during the Hellenistic period. It contained a large quantity of Hellenistic plain and black-glazed pottery, and amphora toes, as well as a few sherds of Late Roman and Early Byzantine combed ware which date its final abandonment and filling.
Slightly to the north, excavation continued in the area of the Late Mycenaean low exedra or platform close to the west side of the tumulus. The unexcavated west half of this pebble surface was exposed, revealing it to be an irregularly-shaped oval feature (8.5m maximum diameter, 6m minimum) in use from LH IIIB2 – LH IIIC Early on the basis of the plentiful pottery from its surface (Fig. 3). Located in an open area, it was probably used for ritual activities related to the tumulus. Damage from further illegal excavation was noted, including the collapse of part of the southeast corner of the monumental limestone exedra in the centre of the temenos.
Two artificial openings in the top of the Mycenaean tumulus were shown to be linked by two cut channels which define an altar-like mass of bedrock in the area between the openings (Fig. 4). The openings may have been made to receive liquid offerings.
At Peristeria, surface survey focused on the area enclosed by the Hellenistic fortification on a height over the west end of the bay. Next to the west part of the fortification circuit a bronze arrow head and a bronze Athenian coin of the late fourth century were found on the surface.
In the course of improving the visitor path around the Hellenistic sanctuary of Dionysos, a terracotta votive phallus was found with amphora sherds in a surface layer immediately south of the water tank by the Cave of Euripides. In combination with the marble phallus previous found, this confirms the character of the cult in the third-second centuries BC practiced in association with the probable ‘heroon’ of the tragic poet. On the slope east-northeast of the sanctuary of Dionysos were traces of the ancient approach road used probably during the Late Classical-Hellenistic period, which ran from the general direction of Peristeria to the height of Ginani. Its course is traceable via a series of at least six successive retaining walls, straight or slightly curved, founded at different levels, and with a preserved height ranging from 0.8-1.5m.
Author
Catherine MORGAN
Bibliographic reference(s)
Unpublished field report, University of Ioannina (Y. Lolos)
Date of creation
2011-06-18 00:00:00
Last modification
2018-08-22 09:24:35
Picture(s) 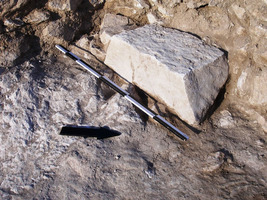 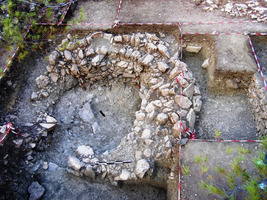 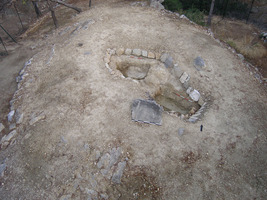