Key-words
Stoa - Sanctuary - Building Type - Site Type
Type of Operation
Survey
Institution
DAI
Toponym
Archaia Olympia
Linked Record
1991199219931994199519971999 (1)199920002002200420052007200820092010201120122013201420152020
Report
Olympia. R. Senff (DAI) reports. After the condemnation of pagan cults and the destruction of its buildings through earthquakes and quarrying, modest settlement within the area of the sanctuary of Zeus continued until the Early Middle Ages. Thereafter, erosion and flood buried the ruins under metres of sediment. However, protective measures dating back into antiquity prove that environmental factors always had a major impact on the topography of the sanctuary. Several cores and geoelectric profiles were made in the previously unexcavated area southwest of the sanctuary by the ancient Kladeos shore wall (Fig. 1), to the west of the modern Kladeos riverbed (Fig. 2), and in the Alpheios plain, to elucidate the sedimentary history of these areas.
A new architectural study of the so-called South Stoa was undertaken. Delimiting the sanctuary towards the Alpheios, the stoa lies at the southern edge of the archaeological zone, marking the limit of the old excavations (Fig. 3). It is open towards the river to the south, with a protruding central section. Built in the mid fourth century BC and repaired at least once during Imperial Roman times, it was excavated between 1875 and 1881 and again in 1937/38 and 1938/39. In 2010, a stone-by-stone plan was made at a scale of 1:50 (Fig. 4). A further aim was to establish whether and how terrestrial laser scanning (TLS) is methodologically and economically viable for recording such a structure, and whether the resulting data can be used for reconstructions. The monument was recorded three-dimensionally through TLS: scatter plots of measurements made in numerous locations were then joined digitally (Fig. 5).
Author
Catherine MORGAN
Bibliographic reference(s)
Unpublished field report, DAI (R. Senff)
Date of creation
2011-06-18 00:00:00
Last modification
2018-08-22 09:24:35
Picture(s) 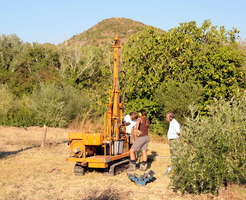 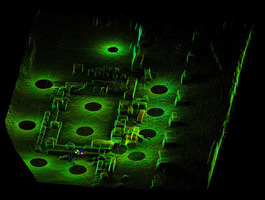