Key-words
Tomb - Residence - Fortifications - Domestic space - Building Type - Site Type
Type of Operation
Excavation - Research excavation
Institution
DAI
Toponym
Kakovatos
Linked Record
20092010
Report
Kakovatos. B. Eder (DAI/Freiburg) reports on the 2010 excavation season at the Late Bronze Age settlement on the acropolis, the graves of which were revealed in earlier excavations conducted by W. Dörpfeld. The aim of the excavation is to clarify the plan, function and date of the preserved architectural remains, partially exposed in 1907/08 but never published.
At the western edge of the hill crest, two walls formed a corner, inside which a pebble layer was traced in several places, indicating a floor of river pebbles or use levels with pebble pavings (Fig. 1). On this floor lay several vessels, the profiles of which could be reconstructed from sherd. These include a so-called keftiu cup (Fig. 2) discoloured by secondary burning. A series of pits was cut into the floor along the internal wall faces, and two pithoi stood in the corner (Fig. 3). The pottery from this structure is a typical settlement assemblage, with fine, coarse and cooking wares as well as storage vessels. Pieces of secondarily fired clay and burnt pottery on the pebble floor suggest destruction by fire. Pottery from the use phase indicates that this destruction happened in LH II. This assessment matches the use of the three tholos tombs at the foot of the acropolis hill, which are dated primarily to LH IIA.
On the western slope of the Kakovatos hill is a wall corner built of several massive blocks with an external face including marl, conglomerate and shelly limestone blocks over 1m long (Fig. 4). The north-south stretch remains recognisable, while old excavation photographs, fallen blocks and washed out fill clearly indicate that it formed a corner at the north end, turning east. Beneath an alluvial clay layer, its fill of small stones was exposed; this contained only one diagnostic sherd dating to the Early Mycenaean period. The wall, plus two parallel, poorly preserved stretches further north, probably served as a retaining wall for structures on the plateau. Its visibility and massive construction underline its symbolic character; its thickness suggests a multi-storey structure, perhaps a tower. It overlooked the entire coastal zone below the acropolis.
Author
Catherine MORGAN
Bibliographic reference(s)
Unpublished field report, DAI (B. Eder)
Date of creation
2011-06-18 00:00:00
Last modification
2018-08-22 09:24:35
Picture(s) 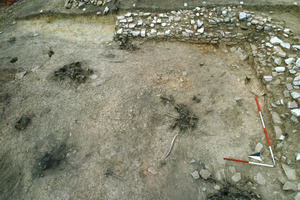 Fig. 1/ Pebble floor of a rubble-built structure in the west of the acropolis, showing burnt vessels from a fire destruction in the 15th century BC. 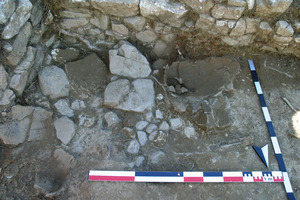 Fig. 3/ The remains of two storage vessels in situ in a pit by the wall of the structure. One contained a charred fig. 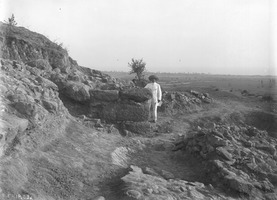 Fig. 4/ The “Cyclopean” wall on the west slope of the acropolis, probably part of a tower-like bastion, although not a continuous fortification wall (old excavation photo with W. Dörpfeld, from N).