Key-words
Fortifications - Residence - Tomb - Figurine - Tools/weapons - Dress and personal ornament - Metal - Glass - Domestic space - Production/extraction site - Building Type - Find Type - Material Type - Site Type
Type of Operation
Excavation - Research excavation
Institution
Ministry of Culture and Tourism: ΚΣτ' ΕΠΚΑ
Toponym
Galatas
Linked Record
2000
Report
Megali Magoula, Galatas. E. Konsolaki-Yiannopoulou (ΚΣτ’ ΕΠΚΑ) reports on excavation conducted in 1995-1997 and 1999-2000. This Middle-Late Helladic settlement lies 2km west of Galatas to the north of the main road to Troizen, overlooking the natural harbour between Poros and the Peloponnesian coast.
An elliptical fortification of unworked stone, perhaps with a mud-brick superstructure, enclosed an area of ca. 0.1ha on the hill top (Figs 1-3). It recalls that at Malthi. Remains of a prosperous Middle Helladic settlement lay in the northern and southern sectors of the enclosure. Houses with securely dated floor and destruction deposits rest on a terrace supported by the fortification wall, and therefore postdate its construction (Figs 4-7). An intramural burial of an infant in a cist grave is noted. There is also evidence for the production of bone implements. The remains of further houses in the lower town were found on the north and south slopes, along with an extensive scatter of MH-LH sherds. There is little LH pottery on the hill top, perhaps due to a shift in settlement focus or to later clearance. The entrance to the acropolis lay on the north side, via a gateway (later blocked) from which a road continued to the north.
The Middle Helladic pottery recovered consists largely of kitchenware, incised ‘Adriatic’ coarseware, grey Minyan, dark burnished, and fine and semi-fine matt-painted wares. (Figs 8-15) A few vessels of Minoanising and Cycladic types are noted, along with a probable late EHIII greyware bowl. There are close connections with Kolonna on Aegina, and probably with sites in the Argolic Gulf also. Megali Magoula flourished during the period of Kolonna Cities IX-X and reached its peak during the Mycenaean period, probably becoming a regional centre following the decline of Kolonna.
Three LH tholos tombs were excavated on the northwest slope. Tomb 1 (of Pelon’s Class C) is large (11.2m in diameter at the base, with a mound ca. 45m in diameter) and constructed mainly above ground. The small tomb 2 (Pelon’s Class A, base diameter 3.8m) was, as tomb 1, robbed in antiquity. Surviving goods date both tombs to LHIIB-IIIB and attest to their elite status. Tomb 1 contained, in addition to pottery, gold, faience and glass jewellery, stone arrowheads, three terracotta bull figurines (one of which is a wheel-made hollow-bodied figure). In both tombs, a thick layer of sea-pebbles lay over the floor. The chamber and stomion area of tomb 2 were again used for burials in the Hellenistic period. Tomb 3, entirely above ground and with no dromos, just a chamber 3.9m in diameter, is reminiscent of Early-Middle Minoan circular tombs (Figs 16-18). Despite modern disturbance, it contained several MHIII/LHI-II cups and goblets. A MHIIIB/LHIA yellow Minyan ring-stemmed goblet may have accompanied one of the earliest burials. A tongue-shaped dagger and Type A sword were also found. Tomb 3 is the earliest tholos yet known in the northeastern Peloponnese.
The acropolis was re-occupied in the late Classical period, perhaps by a garrison. The fortification was reinforced with semi-circular bastions on the east and west: three rooms abutting the reinforced inner west face of the fortification produced pottery of this period. Τhe entrance to the fort at this time was from the east.
Author
Catherine MORGAN
Bibliographic reference(s)
E. Konsolaki-Yiannopoulou, ‘The Middle Helladic establishment at Megali Magoula, Galatas (Troizenia)’, in A. Philippa-Touchais, G. Touchais, S. Voutsaki and J. Wright (eds), Mesohelladika (BCH supp. 52), Paris/Athens 2006, 67-76;  E. Konsolaki-Yiannopoulou, ‘Νέα προϊστορικά ευρήματα από την Τροιζηνία’, in V. Vasilopoulou and S. Katsarou-Tzeveleki (eds), From Mesogeia to Argosaronikos, Markopoulo 2009, 504-511.
Date of creation
2011-03-18 00:00:00
Last modification
2018-08-22 09:24:35
Picture(s) 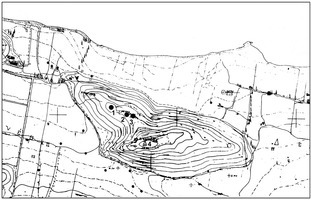 Fig. 4/ Deer cranium and antlers in the floor deposit of a MH house. 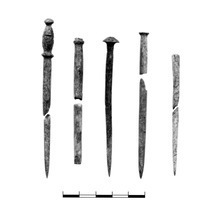 Fig. 6/ Projectile points of bone (below right) and chipped stone. 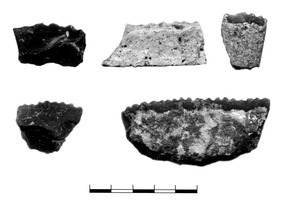 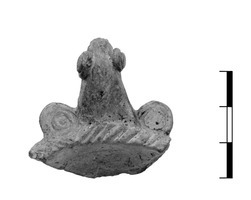 Fig. 8/ Rim fragment of a small bowl with zoomorphic protome. 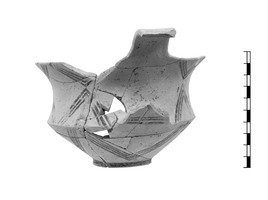 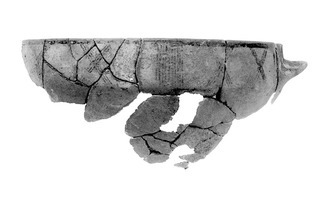