Key-words
Tomb - Figurine - Inscription - Tools/weapons - Dress and personal ornament - Wood - Metal - Minerals - Domestic space - Production/extraction site
Type of Operation
Excavation - Research excavation
Institution
University of Athens
Toponym
Lazarides
Linked Record
200220062007201020112012
Report
Lazarides. Ν. Polychronakou-Sgouritsa (University of Athens) reports on continuing excavation in the Mycenaean settlement south-east of the cemetery in 2009 and 2010.
Work in 2009 focused on a complex (approximately 10.5m north-south x 4m east-west) comprising three adjoining small rooms and a fourth which gave external access to them. The stone walls of these rooms are preserved to a height of 1.4m and an average thickness of 0.7m: in two rooms low stone benches are set against the walls. The monolithic stone thresholds show particularly careful workmanship (Fig. 1); in one case a drainage channel is cut into the upper surface. The architectural remains and portable finds indicate two or three construction phases, although no destruction level was found.
Three of the four rooms were used for storage (noting numerous sherds chiefly of pithoi with incised and impressed decoration) and for craft production as indicated by stone and metal tools, steatite spindle whorls, and raw materials such as a lead ‘talent’, flint cores, and pieces of kaolinite and quartz. In addition, a quantity of sherds was found with a variety of potters’ marks, plus three terracotta discs (Fig. 2) one of which had an incised sign, and a sherd with incised numerals (?). Many pot-stands, fewer fineware sherds (mostly of drinking vessels), and a quantity of animal bones and shells, confirm that food preparation took place in the same rooms.
Work in 2010 was undertaken in an area 10m southeast of the rooms excavated in 2009. A second complex of seven rooms and open areas covered an area of 130m2. Only a small part was excavated, not least because of the accumulation of large mounds of stones which had fallen into the rooms from the upper courses of the walls and the roof. The northern exterior wall of the complex (13.7m long) contained a 1.7m wide entrance with impressive monolithic pilasters on each side.
A large quantity of pottery was found in one 7.2m x 1.5m room in the eastern part of the excavation. Many Middle Helladic sherds were found, comprising matt-painted of good and medium quality, Minyan, and red polished (red-slipped “Aegina-type” or red-slipped-and-burnished), as well as Mycenaean (LHΙ/ΙΙ – LHΙΙΙC Early) of all categories – coarsewares, especially kitchen vessels (mostly chytres), standard wares, and fine wares including several LHΙ/ΙΙ decorated with ripple pattern (FΜ 78:2, 3) and one LHΙΙΙΑ1 with stipple pattern (FΜ 77:2). Other finds include the greater part of a bovine figurine, steatite spindle-whorls, a bone item analogous to a stylus, stone tools and vessels (mostly grinders and rubbers), bones and shell. From this area, and below a small stepped construction, a small mould-made lead weight (ca. 20g) in the shape of a duck (Fig. 3) was found with LHΙΙΙΑ2 and LHΙΙΙΒ1 sherds. This is comparable to Cypriot finds from settlements such as Ag. Dimitrios and Kalavasos, and from a funerary peribolos at Enkomi.
The neighbouring small semi-basement space (2.7m x 2m wide as preserved) produced finds similar to those in the previous room. Other finds include pieces of wood and lead hinges probably from a chest which seems to have contained an almost complete and very well-preserved bronze spiral (Fig. 4), steatite whorls, a terracotta bead perhaps from a small necklace, and a bone needle.
In the open-air area west of the above-mentioned rooms, a child grave was found just above bedrock, set among stones and containing 58 beads of faience, glass paste and semi-precious stones (one of cornelian and three of sard).
Analysis of lead and bronze objects at the NCSR Demokritos indicates that the lead objects at least were produced locally from metal imported from Lavrion.
The structures and portable finds from the settlement indicate that complexes of rooms were spread over the plateau and the slope leading to it. The settlement was abandoned with no evidence of fire destruction at the beginning of the 12th century BC, after some four centuries of occupation. There is no evidence for later activity.
Author
Catherine MORGAN
Bibliographic reference(s)
Unpublished field report, University of Athens (N. Polychronakou-Sgouritsa)
Date of creation
2011-03-17 00:00:00
Last modification
2021-08-21 06:49:08
Picture(s) 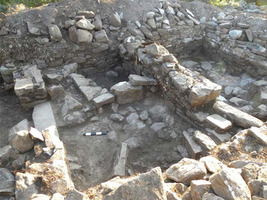 Fig. 1/ View of the rooms from the southeast. 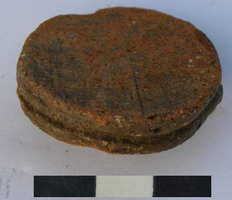 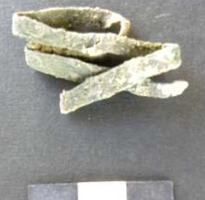