Key-words
Agricultural facility - Building Type
Type of Operation
Excavation - Research excavation
Institution
Scuola Italiana di Archeologia ad Atene
Toponym
Ag. Triada
Linked Record
200820092010
Report
Agia Triada. V. La Rosa (SAIA/Catania) reports on excavations in 2010 focused on an Neo- and Postpalatial extension of the settlement north-northwest of the fenced area (Fig. 1).
Excavation in a level area by the small road to Kamilari (trench A) failed to produce evidence of the dates under investigation. Rather, the stratigraphical sequence shows a series of flood deposits from the nearby Ieropotamos in the Early Byzantine or Venetian periods.
Trench B, on an open slope before Tholos B, produced no evidence of flood. The only sequence of prehistoric levels lay at the north side, where a series of steps in the natural kouskouras (Fig. 2) may have been made to even out the terrain.
Significant information about the use and agricultural exploitation of the area in the Early Byzantine and Venetian periods was recovered. The bedrock was deliberately smoothed, and delimited upstream by a light enclosure wall, perhaps forming a service or storage area. Nearby at Tholos A, Halbherr knew of a late presence, perhaps associated with this structure. Between the seventh and eighth centuries AD, and perhaps in Venetian times too, one or more isolated farmsteads exploited this fertile riverside strip. Early Byzantine activity is now added to the long history of this site: thereafter there is no evidence from the period of Arab domination, and recovery took place only at the beginning of the Venetian era.
Author
Don EVELY
Bibliographic reference(s)
Unpublished field report, Scuola Italiana di Archeologia ad Atene
Date of creation
2011-03-02 00:00:00
Last modification
2018-08-22 09:24:35
Picture(s) 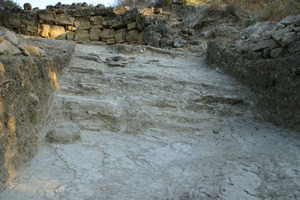