Byzantine House Complex: the Altar of Theos Hypistos. J.M. Fabrini (SAIA/Macerata) reports on study of material from the 2003 excavation of the altar and from the 1997-1998 excavation of the rear face of the temple in the Praetorium.
Decorated ceramics are well represented from the Byzantine houses and the West Street, with the late fourth- to fifth-century repertoire better known than that of the sixth to seventh centuries. The earlier set has a limited range of forms, mostly basins plus a few closed shapes (e.g. bottles). On basins, painted decoration is generally limited to a zig-zag on the flat rim; a few also have larger motifs inside, including elaborate volutes and leaf-shaped ornament.
The Baths, South of the Praetorium. G. Bejor (SAIA/Milan) reports on the 2010 excavation (Fig. 7) which focused on the eastern section of the caldarium and on the apodyterium to the north (where excavation began in 2009).
In the caldarium (Rooms K, N1 and N2; Fig. 8), the north and east walls (damaged by a large modern pit) were rebuilt at the start of the sixth century AD, along with two unheated basins in Room L. Close to the angle of these walls, a well-preserved head of Hygeia (in the Hope version) was found built into them. Significant remains of the heated rooms of the baths built at the start of the fourth century AD were found in deeper levels, notably traces of the underfloor of the caldarium in Room K and its system of suspensurae. Loss of evidence due to later construction makes it impossible to determine the original extent and layout of the heated area of these earlier baths.
The large paved apodyterium was defined in Room H (Fig. 9). The west wall had been totally removed in the past, but its position can be traced accurately. The beginnings of an pavement outside the north door confirms the boundaries of the building. The outlines can be traced of a large later pit made to hold rejected pieces taken from the large blocks of the north west pillar in the frigidarium (Room F). The pit had almost completely destroyed the two doors into the apodyterium. In Room G, a small lime-kiln was revealed, set on a base (1.25m x 0.87m) of brick and marble slabs with gaps between for ventilation. Numerous fragments of polychrome marble (opus sectile) were recovered, many with obvious traces of burning, debris of an incomplete process of lime-burning. This kiln indicates a short period of recycling, following the collapse of the sixth-century structure but before re-use of the building in the later sixth to seventh centuries AD. The kiln base is set on a layer of soil and ash, under which is a pebble surface contemporary with the large pillar at the north west of the frigidarium, and thus dating to the earliest stage of the Baths. This might be an open-area, balancing the position to the south of entrance room A.
Finally, both areas revealed traces of a long east-west wall on which the fourth-century AD baths were set, in part reusing it. This runs in parallel with a stylobate just to the south of entrance-room A: a rectangular agora might have existed here.
Author
Don EVELY
Bibliographic reference(s)
Unpublished field report, Scuola Italiana di Archeologia ad Atene
Date of creation
2011-03-02 00:00:00
Last modification
2018-08-22 09:24:35
Picture(s) 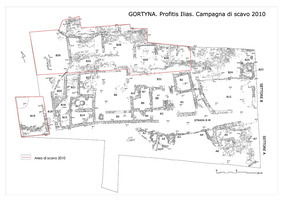 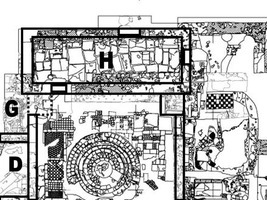