Key-words
Residence - Figurine - Numismatics - Tools/weapons - Plant remains - Bone - Stone - Domestic space - Building Type - Find Type - Material Type - Site Type
Type of Operation
Excavation - Research excavation
Institution
Ministry of Culture and Tourism (EPSNE): British School at Athens
Toponym
Neo Monastiri
Linked Record
200320082010201120122015201720182019
Report
Koutroulou Magoula. Y. Hamilakis (BSA/Southampton) and N. Kyparissi-Apostolika (EPSNE) report on the first season of a new collaborative excavation and archaeological ethnography project centred on this Neolithic settlement.
The mound (206m long and 182m wide) rises some 6.6m above the surrounding fields (at 130.7masl). Almost half of it, and especially the west part of the settlement, had been destroyed by modern farming. The topography and extant archaeological remains were surveyed (Fig. 1) with attention to two major structures (Fig. 2) - Building 1 (5.3m long x 4.3m wide in its latest phase) which had at least three habitation phases (Fig. 3), and the rather larger Building 2 (7.2m long x 6.4m wide) situated at the highest point of the settlement. Topographical survey also revealed terracing and possibly retaining walls on the north side of the magoula (particularly significant as farming and dumping of soil has destroyed or obscured most such evidence elsewhere).On the north side, a rise of 2m is met by a flat terrace 8.5m wide and 30m long which could easily have accommodated a series of structures of similar size to Building 1. The principal occupation phase dates to the Middle Neolithic, but traces of later periods include a post-medieval well.
Excavation in 2010 aimed to uncover more of Building 2, to investigate the area outside its north, east and south sides, to explore the possibility of earlier building phases, and to provide stratified material from deposits predating the building. Building 2 is a robustly built rectangular structure with elaborately constructed walls and clay floors laid on top of a stone-paved deposit (Fig. 4). It underwent a series of modifications and alterations which will be explored further in future seasons. In contrast to the areas outside the building, the interior was largely empty of finds, and there is no evidence for destruction outside. The south wall of the structure did not survive; that it once existed is shown by a slight turn to the west of the east wall at its southern limit, and by the undamaged south end of the floor foundation which suggests that the floor was deliberately removed.
Without clearly identifiable internal features or finds the building’s function cannot be determined. Its size, elaborate construction and probable repairs to the east wall suggest an important and probably long-lived structure, perhaps with ancestral connotations. The clean interior and possible evidence for careful, arguably methodical demolition, suggest deliberate destruction. Similar practices have been discussed for the Neolithic of the Balkans.
Deposits excavated on the northeast side of Building 2 mostly predate the building stratigraphically. Numerous finds within them include clay figurines, plain and decorated pottery, chipped and ground stone, animal bones and shell. Notable among the finds from the main, Middle Neolithic, settlement phase are many clay figurines (more than 30 found in 2010, Fig. 5) which, when added to the high numbers collected in previous years, means that Koutroulou Magoula has one of the largest collections of Neolithic figures from stratified contexts in Greece. These were found in a variety of contexts, with no clear association with specific features or other finds.
Evidence for later phases of occupation comprises some Bronze Age pottery and a substantial amount of Medieval (Byzantine and Ottoman) pottery and tile in the upper layers, plus a 12th-century Byzantine coin. These are too numerous to be chance finds, and imply Byzantine activity, although the lack of secure context is problematic.
A programme of environmental sampling accompanied the excavation, and analysis of samples from previous seasons continued. Soil micromorphology was used to investigate the laying out of floors, and the nature of some clay deposits. Initial assessment of the animal bone assemblage (2001-2010) revealed that among the sub-sample identifiable to species (34%), sheep/goat represented 76%, cattle 13%, pig 10%, and dog 0.8%. This sample derives from a variety of areas and excavation seasons and may be representative of the whole site. Tortoise, hare, roe deer and red deer are also present in smaller quantities. A number of scattered human bones were found mixed with animal bones, possibly indicating the circulation of human bones within the settlement (thus shedding light on little understood Neolithic death-related practices). Several bone tools are the subject of zooarchaeological-technological study.
In 2009, 29 soil samples were collected from undisturbed excavation units, with all types of context (floors, pits, postholes, pot contents, hearths, use layers etc.) equally represented. The botanical material corresponds to a variety of species – cereals (einkorn, emmer and barley), legumes (lentil, pea, vetch/vetchling), fruits/nuts (fig, terebinth, elder), herbs and/or various wild flora elements (both edible and inedible).
Ethnographic work undertaken in parallel with the excavation combined investigation of local communities with that of their relationship to the material past. The community of Neo Monastiri is of particular interest as that one most closely associated with the site and the research team. Most people in the town are refugees and descendants of refugees from the former Anatoliki Romilia (in modern Bulgaria), who arrived in the 1920s. They hold strongly to their distinctive identity, expressed primarily through language, dance and music, although the archaeological ethnography strand of this project is far wider, taking as its core elements, material culture, and notions of memory and temporality.
Author
Catherine MORGAN
Bibliographic reference(s)
Unpublished field report, British School at Athens AD 64 (2009), B2, p. 1033-1034.
Date of creation
2011-02-28 00:00:00
Last modification
2018-08-22 09:24:35
Picture(s) 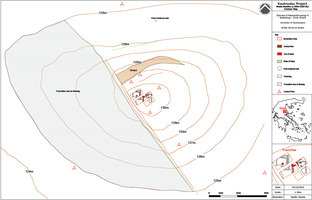 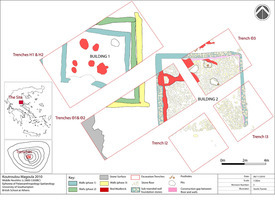 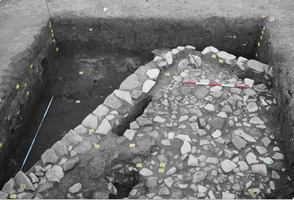 Fig. 4/ Koutroulou Magoula: Building 2, showing the northern and eastern walls and part of the interior.