Key-words
Residence - Tomb - Inscription - Commercial area - Domestic space - Road system/waterway - Building Type - Find Type - Site Type
Type of Operation
Excavation - Research excavation
Institution
American School of Classical Studies at Athens
Toponym
Korinthos, Corinth
Linked Record
20002006200720082008 (1)20092010
Report
Ancient Corinth. G. Sanders (ASCSA) reports on the 2010 season of excavation south of the South Stoa, in an area previous investigated from 1965 onwards.
The Byzantine house investigated in 2008 and 2009 was uncovered as far as its construction phase. Outside it, to the north was a fall of 11th-century roof tiles. Several complete profiles of cover (0.71 x 0.30 to 0.34m) and pan tiles (0.53 x 0.15 to 0.17m) were restored, the first of this period recovered at Corinth. These can be compared with Late Roman and Frankish size modules. The construction of the house is placed in the middle of the 11th century. Finds from earlier seasons indicate that several modifications were made to its form over the course of the following 250 years. A number of activities took place during its occupation, some purely domestic in nature, but others commercial (e.g. catering, crafts and sales) and agricultural. All of the material recovered in the 1960s excavations has now been recorded and re-examined, and study of the new finds is well advanced.
Part of the house reused cement and rubble walls of the Late Roman period. No plan for this phase can yet be restored, but a fragmentary opus sectile floor was reused in the Byzantine building. This Late Roman building was probably built in the sixth century and relates to the later walls preserved in Room H and the neighbouring baths in the South Stoa. The building was abandoned at some point in the seventh century, and parts of its walls were robbed in the eighth. This late phase of activity is also characterised by the burial of an infant in an amphora (found in 1965) and by pottery found in 1963 to the west.
Deep soundings were made to locate a west intersection between the decumanus south of the South Stoa and the southern extension (the “Kenchrean Road”) of the cardo maximus (the Lechaeum Road). A late drain built of spolia, the robbed-out south wall of the decumanus, and the broken southwest corner and the lack of any traces further west, confirm that the Kenchrean Road never extended the line of the cardo and always followed the path illustrated in the Corinth volumes.
Excavation of the colluvium eroded off Acrocorinth revealed quantities of Late Neolithic, Early Bronze Age and Hellenistic pottery (as in the colluvia in the Panayia Field), thus dating this neogene phase to the third millenium BC. A Hellenistic cellar dug into the colluvium contained a dumped fill of pottery of the early third century BC. Another fill of the mid third century contained sherds of a one-piece kantharos with four lines of an inscription on the interior (Fig. 1). A preliminary reading identifies on line 1 part of a personal name; line 2, ‘a crescent-shaped… [offering? and]'; line 3 ‘a plaque to the hero… [and]’; line 4 ‘fresh frankincense…’.
Author
Catherine MORGAN
Bibliographic reference(s)
Unpublished field report, American School of Classical Studies at Athens
Date of creation
2011-02-28 00:00:00
Last modification
2018-08-22 09:24:35
Picture(s) 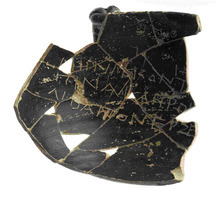