Key-words
Bath - Cistern - Inscription - Lamp - Architectural revetments - Sculpture - Stone - Hydraulic installation - Honorific monument - Road system/waterway - Building Type - Find Type - Material Type - Site Type
Type of Operation
Excavation
Institution
Ministry of Culture & Tourism (ΚΕ' ΕΠΚΑ)
Toponym
Aptera
Linked Record
1987199419961997199920002000 (1)20012002200520062010
Report
Aptera. V. Niniou-Kindeli reports on work undertaken in 1999 and 2000 across the settlement (Fig. 1). Six foci of research are reported.
(1) A massive Γ-shaped cistern (Fig. 2) (up to 55.8m long), which was dug into the bedrock, partly built in opus caementicium and lined with hydraulic plaster. The original roof is now lost, and it is likely that the cistern was left open after the devastating earthquake of AD 365. Shafts and drains for its operation were also found. The cistern was filled with debris from a nearby monastery.
(2) A tripartite cistern (Fig. 3), of similar construction to that above but with a third of the capacity (ca. 3m3). Its exterior is supported by buttresses and the interior by square pillars, with a stairway for access and an overflow shaft.
(3) Bath-house I. This has large standing walls at the north, and, while the full extent of the building is unknown, it clearly forms part of a public bath complex, with a likely construction date in early Imperial times. Trials revealed a destruction layer from the seventh century AD earthquake. Four hypocaust systems have so far been discovered, with related praefurnia. A kiln in room A indicates a change in use of this area in Late Roman times. Quantities of ceramics, broken statuary and parts of inscriptions, including a dedication slab, were located.
(4) Bath-house II. Thus is better preserved, with walls standing to a greater height due to the quantity of fill in the rooms. Excavation was taken to floor level in two areas. The largest area, the frigidarium, has a pebbled floor, with two pools in side chambers (one semicircular, the other rectangular); the smaller rooms contain a hypocaust, praefurnium and flues. Following the earthquake of AD 365, temporary use was made of the space within the walls, perhaps with some perishable covering over open spaces. Many sixth- to seventh-century AD lamps were recovered, along with cooking vessels amongst burnt layers. The physical proximity of the two cisterns and two bath buildings, and the presence of channels between them, likely indicates that they form part of a single scheme.
(5 and 6) Pathways. A large cobbled pathway linked the northeast of the kastro with the prison of Itzedin during the Ottoman period, and remained in use until recently. A medieval path, which linked the west side of the fortification with the centre of the village during the period of the monastery, was cleaned along its whole length. Immediately below surface levels, cleaning revealed part of a building as well as pieces of sculpture and inscriptions used as construction material for the path. In the process of cleaning operations to facilitate connecting the path to the modern road in the area of the main entrance to the city, the fill covering the slope between the road and the fortification was removed. Part of the ancient road was revealed, built from large slabs, as well as part of a Heroon. Between two groups of robbed cist tombs were five pillar-shaped bases, with inscriptions preserved on the four most complete. One can be read in its entirety: Η ΠΟΛΙΣ/ ΠΡΑΞΙΟΧΟΝ/ ΦΙΛΕΤΑΙΡΟΥ/ ΗΡΩΑ. One further cornerstone, which must belong to a sixth base, reads: ΑΙΜΙΛΙΟΝ/ ΧΑΡΙΔΗΜΟΝ/ ΗΡΩΑ. The inscriptions are dated by letter forms to the first to second century AD. Between the bases were the stratified remains of ritual pyres, dating from the late first century BC to the early second century AD. Ritual equipment includes very large plates as well as vessels for liquids. Together with the burnt remains of liquid offering containers were carbonized olive pips and almonds. A deposit of numerous Hellenistic lamps of the second to first century BC relates to a similar ritual; these were found within an irregularly-shaped pit, together with lead and stone shot. Heroes were honoured in this place from at least Hellenistic times. Fallen architectural remains, as well as the krepis of a building with a column in situ, indicate the likely presence of a funerary monument connected with a hero. A marble relief with the busts of a man and woman, while unusually fine for a Cretan work, is typical of early Imperial funerary monuments and dates to the Trajanic period.
Author
Don EVELY
Bibliographic reference(s) 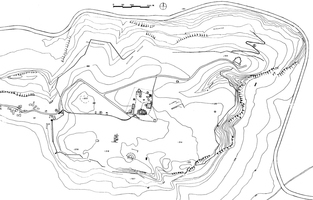 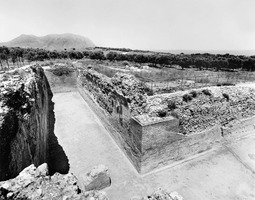