Toponym
Falasarna
Linked Record
2022
Report
Archaeological site of Falasarna. Elpida Chatzidaki (Ministry of Culture and Sports) and E. Papadopoulou (Ephorate of Antiquities of Chania) report findings from the ancient temple of Demeter at the Acropolis of Falasarna that date to the Archaic and Classical periods.

Before it collapsed, the temple was built on a rocky hill, at the plateau between two mountain peaks, with a natural cave with plenty of water. After the collapse, the rocky hill was used as a sanctuary for chthonic deities related to earth, water, fertility and the symbolism of water as a life source. 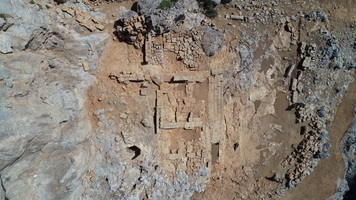