Toponym
AvlemonAS, Avlemon, Ag. Nicolaos
Linked Record
20122013201920202021
Report
Kythera - Mentor Shipwreck. Dimitris Kourkoumelis (Ephorate of Underwater Antiquities) reports on discoveries made during the excavation of the shipwreck Mentor, first investigated in 2019. Recent discoveries contribute important information on how the ship was built, while also offering a glimpse of the lives of the people on board.

The first sector excavated was on the keel on the N side, aiming to clarify construction details. The connection point of two parts of the keel was located, and metal sheets were found that had covered it, now folded in places, indicative of the fact that the ship was dragged a few metres after sinking until its left side hit the bottom. At this point, between the timber and other wood, parts of the ropes from the ship’s equipment and some of the objects once belonging to the crew were found, including pieces of military uniform, furniture, and a gold ring decorated with flowers and dots. An identical ring had been found in 2019.

The second sector investigated was in the S part of the ship. The aim was to investigate the hull, and to make observations and measurements on the structure of the ship. The sector covered almost the entire length of the S end of the ship. Large metal sheets were found and the hull was in good condition. Of interest were two large sections of rope and two Dutch coins (issued in 1777 and 1800). A compass was also located, which could be rebuilt using fragments located in 2013 and 2015. It is possible that this object belonged to William Martin Leake, who was travelling on  this vessel. 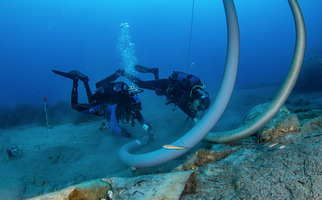 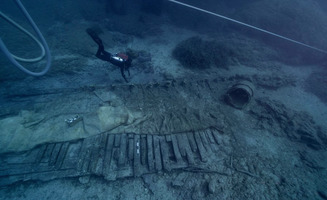 Fig. 7/ Reconstruction of the compass 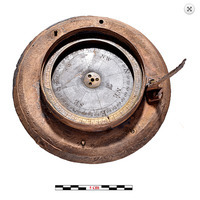 Fig. 8/ Part of the compass after cleaning 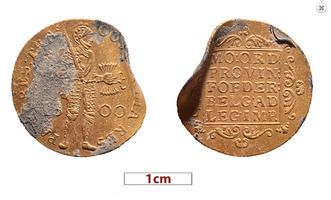 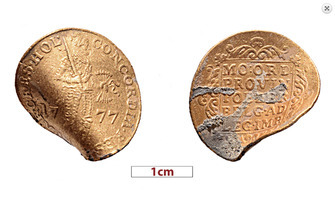