Ancient Corinth. K. Kissas (Ephorate of Antiquities of Corinth), reports on the continuation of the excavation alongside the motorway of Eleusis-Tsakona in different sites of Ancient Corinth. The areas excavated were many, and they revealed a multitude of antiquities, dated between the Geometric and the Roman times.

Amongst the areas excavated, on the W side of the rectangular sewer L129, a ritual area (altar of heroes) was revealed (fig. 1). The E side of this construction was destroyed by three archaic burials (two of which were children’s burials). It was only partly excavated, as its S side was out of the sewer L129. The pottery was both utilitarian and fine, and burned bronze and iron items were located on the centre of the construction. It was dated, according to the pottery, in the Middle Geometric II times (early eighth century BC).

On the E side of the rectangular sewer L129 (kilometric position 0+800) the excavation revealed (among others), a sepulchral monument. The monument no. 39 was only partly excavated, as its S side was outside of the excavated area. Its N side was defined by two stone steps and by a burial larnax shaped like a bed and oriented E-W, on the E side of the staircase. The roof was possibly made of tiles, and the walls were decorated with colourful mortars (red and yellow), which were found fragmented in the destruction layer. The natural bedrock had been smoothed over, in order to serve as the floor. The monument contained three burials, two of which were built larnaxes, shaped like beds, while the third was carved in the floor, in a rectangular trench, covered by stone slabs. The burials contained few grave-goods, amongst which were bone pins, beads, iron nails and a bronze ring (burial II). The burials contained multiple individuals, not simultaneously buried.

A building dated in the early Hellenistic times was also located in the same excavation area (kilometric position 0+790-0+780). Two well-mouths and a shallow tank were found in the building’s inside, while its floor was covered by hydraulic mortar. The S side of it had been used as a burial area during the Roman times (fig. 2).

Finally, several burials were located between the kilometric positions 0+780-0+750, some of which contained golden grave-goods. 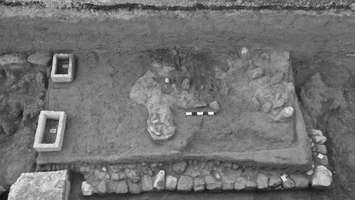