Bays of East Attica Regional Survey. S. Murray (University of Toronto / CIG) and C. Pratt (University of Western Ontario / CIG) report on the second season of the Bays of East Attica Regional Survey (BEARS) Project, 31 May to 2 July 2021. The goals for this season of work were to finish the survey of the outer slopes of the Koroni peninsula started in 2019, and to survey Praso islet.

Gridded collection on the Koroni feature d001 (the valley) and d002 (the acropolis) in was completed in 2019, but intensive survey of the previously unexplored slopes around the acropolis remained incomplete. During the final two weeks of the 2021 season an intensive survey team completed the process of intensive survey around the slopes of Koroni. Additional intensive survey units encompassed the undeveloped hilltop to the immediate south of the isthmus currently connecting the Koroni peninsula to the mainland, where the Karten von Attika shows the foundations of ancient structures. Survey in unit on the Koroni slopes facilitated the discovery of many substantial features that will be mapped and studied in detail in 2022, including an interesting round tower on the outer flanks of the peninsula that appears related to the fortification architecture atop the acropolis. On the other hand, artefacts encountered and collected in the units surveyed in 2021 were minimal. Notable exceptions included the identification of additional LH IIIC pottery on the slopes of the acropolis and the location of a possible dump from the 1960 excavations.

The team spent most its time in the 2021 season surveying the islet of Praso. Praso (also named Prasonisi or Karavonisi on some maps, and once known as Gaidouronisi amongst locals) is a low-lying islet directly to the southeast of the Pounta peninsula that bifurcates the bay into northern and southern sections; it is separated from Pounta by a narrow channel measuring just over 250 meters across. The island’s maximum east-west extent is 350 meters, while at its widest it measures 200 meters. Its topography is not dramatic; the highest point of the islet is at 9 masl, the peak of a small hillock characterizing the eastern part of the island. North of the peak most of the surface of the island consists of limestone bedrock ridges interspersed with shrubby phrygana, while the south and southeast are currently covered in typical low-lying grasses and shrubs, including substantial quantities of wild asphodel, euphorbia, and fennel, with some pockets of lentiscus and wild olive. A flat apron of land in the western section of the island is largely devoid of vegetation aside from parched grasses. Access to the island is facilitated by a small sandy beach at the southwest. The rest of the shoreline around the islet consists of barren limestone beachrock.

The Praso surface scatter, designated as feature a003, was divided into 107 units, notionally each constituting a 20x20m square, although units on the shore of the islet were often truncated by the sea, so were effectively smaller in area than the notional 400 sq. m. of the normal survey unit. The total area of the survey grid is just over 4.4 hectares (40,400 sq. m.). The survey and sampling methods for gridded collection were as described for gridded collection in the 2019 season report.

Survey on Praso documented a dense scatter of pottery, tile, and other artefacts attesting to diachronic use across the duration of habitation in the Porto Rafti area, with finds ranging from the Final Neolithic to Byzantine Periods. The diachronic diversity of archaeological finds from Praso represents an anomaly within the archaeology of Porto Rafti – most known sites around the bay (Perati, Koroni, Pounta, Raftis) show intensive use only in one or two periods – and a significant departure from prior understanding of the islet’s archaeological significance, since extant knowledge of archaeological material on the site was limited to Vermeule’s observation of Roman and Byzantine pottery on the surface, and perhaps some walls near the south-central coast.

Contrary to this passing observation, artefacts of all kinds are present throughout nearly the entire surface of the islet. However, finds are not distributed across the islet uniformly. Notable concentrations of ceramic and tile exist on the flat apron extending over the western third of Praso and along the central part of the south-facing slope. The surface of many units in the latter area appears to consist of collapsed building material, including rubble and tile. In such units, the surface pottery was primarily late in date, from the Roman and Byzantine periods, and tile counts were especially high. However, near the southern shore of Praso, a great deal of prehistoric pottery was observed eroding out from below the later material, suggesting that later architecture overlays considerable Classical/Hellenistic and prehistoric deposits lower down in the islet’s stratigraphy. Units in the northern part of the islet, where bedrock predominates, were largely devoid of finds, aside from highly worn Bronze Age sherds and some tiles that had obviously fallen or eroded down the slope from the peak of the islet. Lithics (almost all obsidian, but a few chert and quartz) and relatively poorly fired sherds of earlier prehistoric fabrics like those documented on the Pounta peninsula were distributed relatively evenly across the islet’s surface; the strongest determinant of recovery of these sorts of finds seemed to be the nature of the surface cover. In sum, the field teams observed great chronological diversity in finds across the island; it seemed that patterns in chronology of finds depend the most on relative disturbance and land cover rather than differential use of territory in the past. That said, across the entire scatter, it appeared that finds from the LH IIIC, Hellenistic, and Late Roman period were generally most abundant.

While there is a great deal of intra-grid variability in terms of density and type of finds, in general, find densities and quantities of diagnostic materials observed were high on the site overall, even in comparison with the very dense surface scatters collected on Raftis, Pounta, and Koroni in 2019. Collections included both squares sampled with the method laid out in the 2019 report and total collection squares. In the 107 20x20m grid squares that surveyed in 2021, the team followed our normal sampling method of counting and weighing tile, collecting a sample of diagnostic types their fabrics of pottery, collecting all lithics and other classes of artefact, and noting/flagging but not collecting groundstone tools. Following this protocol, the team counted and weighed a total of 23,831 tiles (weighing 2,333 kg.) but collected only 26, collected 3,524 diagnostic pottery sherds, collected 266 lithics, collected 320 miscellaneous ‘other’ artefacts, and observed 32 groundstone tools on Praso.

Finds from Praso were not limited to pottery, tile, and lithics. A total of 320 objects categorised as ‘other’ were collected on Praso in 2021. These objects included fragments and lumps of metal (iron, bronze, and lead), pieces of lamps, fragmentary terracotta anthropomorphic and zoomorphic Bronze Age figurines, pyramidal loom weights and spindle whorls, glass vessel fragments, and large quantities of material associated with both ceramic (pottery and tile, see below) and metallurgical production. An unusual find of part of one foot and part of the grinding basin of a basalt tripod mortar was collected, despite our general practice of leaving groundstone objects in the field. We also gathered a sample of perforated, worked ceramic objects in many shapes, fabrics, and sizes, of which many additional examples were left in the field. The team are currently unsure of the function of these objects, but there are hundreds in the surface assemblage overall; additional examples were collected from Raftis islet in 2019. Like the pottery, the miscellaneous small finds from Praso attest to human occupation of the islet during several different periods. Likewise, the range of finds suggests a diversity of uses for the islet over time, including everything from ritual to industrial activities. 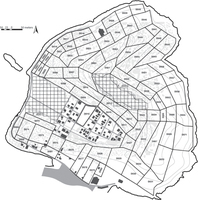 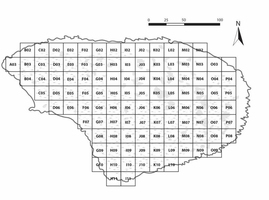 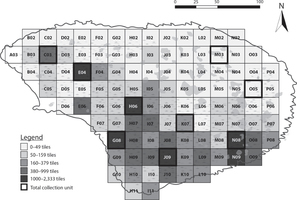 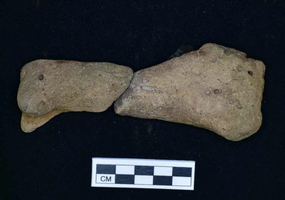 Fig. 8/ Metal slags from a unit on Praso 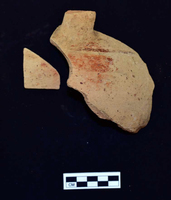 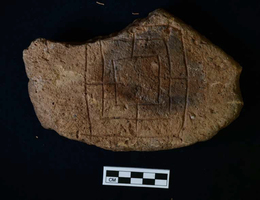 Fig. 10/ A tile inscribed with a geometric pattern