Key-words
Fortifications - Port
Type of Operation
Survey
Institution
American School of Classical Studies at Athens
Toponym
Gournia
Linked Record
19891991199219931994199519971999200120022004200620082009
Report
Gournia Survey. L.V. Watrous (ASCSA/Buffalo) reports on EDM mapping and cleaning in the area of Sphoungaras (Fig. 1). Four natural promontories are seen east of the river within 200m: from the west, the first and third are naturally inacessable with high cliffs, as is the river bed (vertical 12-18m high banks); the other two slope gently and were built on; the east flank is protected by a ridge.
The main construction on the secong headland is the Shore House (1): its location and two galleries running out to sea recall the shipsheds of Kommos and Herakleion (Poros). They measure 25m by 10m across. Built in MMIIIA, they incorporated two earlier rooms at the south. The best-preserved western wall is built of Cyclopean-sized blocks of bright white limestone; the original floor is a packing set on the natural conglomerate. Behind the galleries, three rooms are entered at the northeast; the eastern room contains the base of a staircase. The block size and the colour of the limestone recalls a deliberate use such as that on the north façade of the palace at Gournia. Its destruction in the Theran tsunami in LMIA is indicated by the way in which these blocks have fallen into the galleries. Pottery associated was predominately large and medium-size storage jars. Later (perhaps in LMII−III), a platform was constructed on the eastern side. Nearby casement walls (Wall 2; 2.5m deep) probably restrict access from the sea.
Holes cut into the promontory's natural rock might have been to aid mooring of vessels.
Four stretches of east-west fortification walls protect the land to the south and access to the town (Fig. 2): such a defensive system is unique in the prehistoric Aegean. Two protect the vulnerable headlands: Wall 3 lies 5m south of the Shore House, while wall 4, (Fig. 3) with a large bastion, defends the eastmost one. 50m inland a north-south road (1.40m wide) runs up to the town: it is cobbled and given kerbs of large upright stones. Its flanks are protected by two more walls. Wall 5 at the west is 135m long and extends to the river: it has a large rectangular tower at its east end (Fig. 4), from which came Neopalatial sherds. Wall 7 to the east is but 52m long: it corners at the west, turning south to connect to the first (8) of four eastwest terrace walls. Another set of eight east-west terrace walls (pezoulia) lies to the south of wall (5). Their south faces rise up above ground level and may have acted as a wind-break; often enclosed they have an entrance at a corner. The few sherds date mostly to MMIII to LMI. Complex (10) to the very south, excavated by Boyd, has a long north-south wall at the ends of which smaller walls enclose rectangular spaces, probably rooms. Plentiful sherds date them to MMIA-II.
Author
Don EVELY
Bibliographic reference(s)
Unpublished field report, American School of Classical Studies; Kentro 13 (2010) 12-14.
Date of creation
2011-02-02 00:00:00
Last modification
2021-02-19 06:45:59
Picture(s) 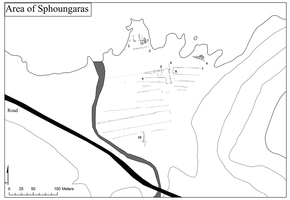 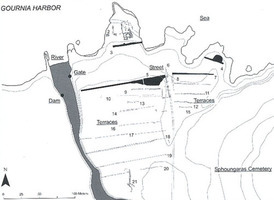 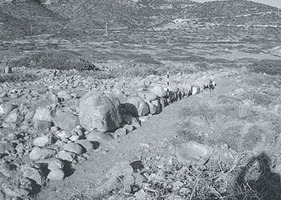