Toponym
Ancient Pronnoi
Linked Record
2014
Report
Pronnoi - Perdikovrysi. Olympia Vikatou (Ephorate of Antiquities of Kefallonia) reports on the excavation of an ancient cemetery, discovered in previous years and dating to the sixth and fifth century B.C.

Following previous years’ work, excavation proceeded to the S (sector P) and to the N (sectors K, L, M, N and O). In sector P an ossuary was discovered (fig. 1), containing the bones of four individuals, probably originally buried in adjacent pits. This ossuary comprised an elliptical trench, bounded by large stones and continuing Corinthian and Attic sherds dating to 570–490 B.C. Iron pins and various pieces of jewellery made from amber and metal were found here. A silver ring was found above this pit, and two iron arrowheads.

In the sector O, a pit was found, containing an infant burial. Some sherds of the sixth century B.C. were found here.

In sector M, below wall A15, another pit burial was found, oriented to the N (fig. 2). Some Attic pottery was found here, dating to the fifth century B.C. Some amber was also found. Fig. 1/ The ossuary after the removal of some of the skeletal remains 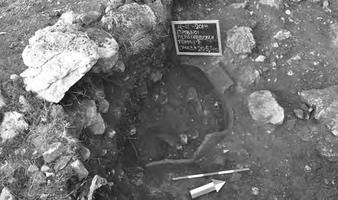