Key-words
Sculpture - Stoa - Hydraulic installation - Public area
Type of Operation
Excavation - Research excavation
Institution
American School of Classical Studies at Athens
Toponym
Agora antique, Athenian Agora
Linked Record
2006200720082008 (1)20092010201120122013201420152016201720182019
Report
Ancient Agora. J.M. Camp (ASCSA) reports on the 2008 excavation season. In section BH, excavations continued below the MByz walls in, over and behind the Painted Stoa. Both the back wall and the interior colonnade of the stoa were found well preserved at its East end. Largely in limestone, the workmanship of the superstructure is of the highest quality. The back wall has limestone foundations which project 0.24m beyond the inner face of the toichobate. Above, 3 toichobate blocks and part of a 4th remain in situ, 1.205m l., 0.935m w., 0.26m h. The tops are finished with a claw chisel and there are 2 pry-holes preserved. Resting on the toichobate are 2 blocks of the outer run of orthostates in situ, 1.205m l., 0.325m w., 0.915m h., which were originally joined with a double-T clamp, now missing. The tops are finished with a claw chisel; the backs are well dressed with a drove and there is a rebate along the bottom, 0.09m h. and 0.01m d.; each block also has a lifting boss preserved. Behind the back wall was found a fragment of a large terracotta pipe associated with the pipeline found in situ running behind the building further west, usually associated with the Kimonian aqueduct bringing water out to the Academy. The fragment was found in MByz fill, suggesting that at the East end of the building the aqueduct had been disturbed. Behind the stoa, generally the fill explored was rubble of the MByz and LRom periods, and so remains have not yet been reached that are contemporary with the stoa. Within the line of the back wall inside the building is a second heavy foundation of soft limestone running 0.30−0.35m from the inner face of the foundations of the back wall and measuring 1.04m w. This same run of limestone was found in a similar situation at the west. Possibilities include support for an inner bench or installation; a pre-Persian version of the Stoa Peisianax, attested in a scholion to Aelius Aristeides (in which case the better-preserved remains above would represent a post-Persian rebuilding); or a remnant of the Archaic city wall of Athens, no trace of which has yet been identified. Within the building were exposed parts of the 2 eastern interior Ionic columns. The western of the 2 survives only in its foundations, 2 limestone blocks set side-by-side. The eastern is better preserved, consisting of a square limestone base, ca. 0.88m on a side, supporting a large cylinder of marble 0.18m h. and 0.79m di. On top of this is the unfluted limestone shaft of the column itself, 0.59m di., preserved to a h. of 0.5m. The closest parallel is the late 5th-century Pompeion at the Kerameikos. A rubble wall running southwest from the easternmost column, 0.6m d. and preserved to 0.6m h., rests at about the level of the original stoa floor and may represent a later blocking of the interior colonnade.
The ΒΘ excavation, in a new section created by the demolition of 2 buildings along Ag. Philippos Street, revealed late fill down to 0.75m below the demolition surface. At the east were reached the tops of rubble walls of the Byz period; to the west, the foundations of the modern building are more extensive. Several large worked blocks in limestone and marble with anathyrosis and double-T clamps suggest they come from more than one substantial Classical building. The lower part of a marble relief of the Mother of the Gods seated on a throne was found built into a Byzantine wall. The head of a terracotta horse matches others found in this area, reminding us that this northwest corner of the Agora was a centre for the Athenian cavalry in Classical and Hellenistic times.
In section Γ, excavation took place in an area of a cluster of small buildings of the Classical period, immediately south of the Tholos, which were put out of use in the Hellenistic period by the shifting of the course of a road. To the east of these buildings is the shop of Simon the cobbler, to the west the ‘Strategeion’. The aim of the excavation was to determine whether these buildings − small, crowded and irregular in their plans − were public or private and, if private, whether they had a commercial function. The discovery of a tile-lined well should confirm the interpretation of the area as an open courtyard. A black-glazed lamp from the well suggests that it went out of use close to the 2nd quarter of the 4th century. Elsewhere in the area, various floor levels and pits were dug, mostly dating to the 4th century. Two fractional silver coins were found, plus a large fragment of an amphora with a graffito. In many instances the fill contained numerous sherds of the 8th and 7th centuries BC, perhaps indicative of earlier houses or disturbed burials.
Author
Robert PITT
Bibliographic reference(s)
Unpublished field report, ASCSA (J.M. Camp); AR 55 (2008-2009), 3-5.
Date of creation
2011-01-25 00:00:00
Last modification
2020-02-17 11:18:05
Picture(s) 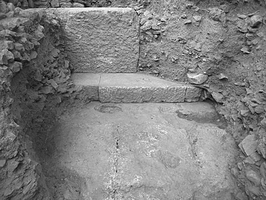 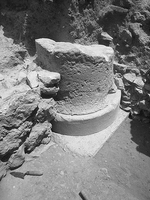 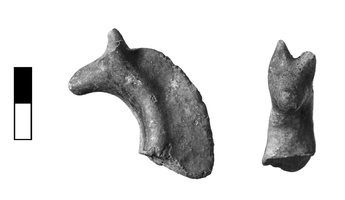 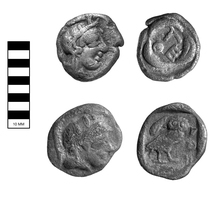 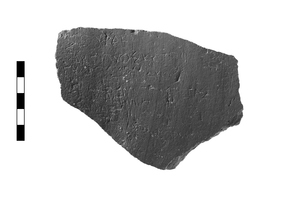