An area W of the Kerameikos Street was investigated, that had previously been excavated in the 1940s and recognised as a workshop area (Fig. 1 and 2). Pottery kilns were also found in the N part, and the area was dated to the 5th century BC.

In the area S of the Kerameikos Street and W of the Lakedaimonian graves an unusual building was uncovered in 2020 (Fig. 3 and 4). Foundations indicate an almost-rectangular building covering 57m2, entered from the S. 67 square tiles were found inside, measuring each 0.33 x 0.33m and laid around the outer walls. It is thought that the building was constructed as a workshop for processing oil: a large stone basin in the centre of the building was used in the pressing process. Along the walls there would probably have been wooden benches in which amphoras for oil were placed. Water necessary for the pressing entered the room through a small channel. The building was located next to another ceramic kiln. 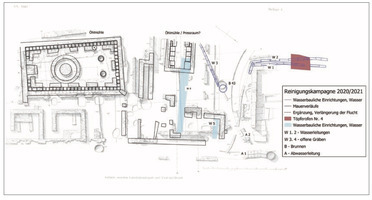 Fig. 2/ Corrected ground plan of the Kerameikos after cleaning 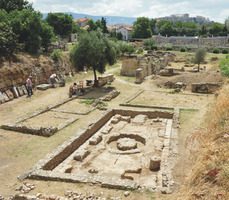