8 Koryzi Street (A. Mamali property). A section of the late fourth-century BC proteichisma (Figs 3-4) was discovered in an area where previous excavations had revealed further sections to the south at Koryzi 10 and to the north at Koryzi 6, with a Justinianic tower (ADelt 18 [1963] Chr, 39; 23 [1968] Chr, 38). The wall here (20.4m long, 1.54m wide, maximum height 3.8m) is founded upon chalk at a depth of 3.27m, is oriented southwest-northeast and preserves seven isodomic courses of large conglomerate blocks (1.2m x 0.5m). A fortification ditch along its east face contains fourth-century BC pottery. Parallel to the wall and within the ditch ran a water-channel of the second to third century AD built of unworked stone and hydraulic mortar (10.4m long, 1.85m wide, 0.7m high), sections of which have been found in more recent excavations at 8 Iosiph ton Rogon Street and 4−6 Neri Street (ADelt, forthcoming). A section of a Roman road to the northwest was also uncovered.

Petmeza and Phalirou Streets. Excavations were undertaken in 1996−1998 of a 515m2 plot at the junction of Petmeza and Phalirou Streets as part of the Metro works (Fig. 5). An ancient cemetery with funerary periboloi and graves dating from Archaic to Roman (excepting Hellenistic) included red-figure fragments of the greatest painters of the early fifth century BC. In the north, a peribolos tomb of conglomerate blocks, 19.5m long and oriented east-west, was preserved to a height of three courses. The Roman tombs were damaged, but mostly consisted of shallow cuttings in the natural rock with covering tiles. Of particular interest in this area, outside the Themistoklean fortification but within the Late Roman Valerian circuit, were five Early Christian tile graves with three built steps. The internal surfaces were lined with cement, and in one a cross was incised on the wall and a fish on the floor. They seem to be associated with a hypostyle building (15.25m long, 6.57−8.45m wide, oriented east-west) in the southwest part of the plot, which may be one of the first Early Christian houses of worship. The walls, of rough stone and cement founded on bedrock, disturbed earlier tombs and periboloi. Inside, three rows of stone bases were probably for wooden columns.
Author
Robert PITT
Bibliographic reference(s)
Th. Iliopoulos and T. Kokkoliou, ADelt 55 (2000) Chr, 78-83.
Date of creation
2011-01-22 00:00:00
Last modification
2020-02-17 10:46:17
Picture(s) 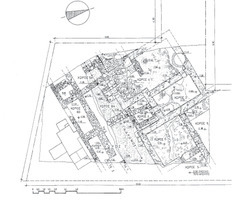 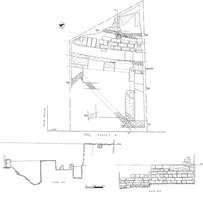 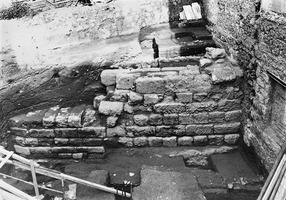 Fig. 4/ Athens. 8 Koryzi Street. Part of the proteichisma. View from the north-east. 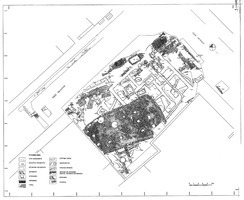 Fig. 5/ Athens. Trench for the Metro at Petmeza and Phalirou Streets. Plan of the excavation.