In the first millennium BC, Samos was a powerful player in maritime trade and a place of pilgrimage due to its famed Sanctuary of Hera, which attracted more international visitors and dedications than any other Greek sanctuary. The island was also exceptional being dominated by a single city-state in the east, the polis of Pythagoreio. Even though some of the richest economic resources were located in the west, plugging the island into both Aegean and Anatolian trade routes networks, an independent polis never developed here. In the Byzantine period, smaller settlements and a network of rural churches were built in the west, but with only a small second-order settlement at Karlovasi. Such a configuration is in sharp contrast to other large Aegean islands, such as Rhodes, Chios, and Lesbos, that were home to multiple city states often with competing territorial relationships. The western area of Samos has not yet been the subject of systematic archaeological survey, although overview work was completed in the 1980s by Graham Shipley (Leicester) for his doctoral thesis, and the Byzantine fortresses are currently under study by Georgia Delli (Athens) for her doctorate. This preliminary work has identified some key sites and monuments, indicating the region would be a fruitful one for further study. WASAP therefore aims to analyse how the nature of the rural landscape of the west of the island developed and to assess whether or not this area really was a ‘blankspot’ in terms of antique settlements, as well as to help articulate the position of Samos in a wider Anatolian- Aegean seascape.

In 2021, the plan was to carry out extensive survey (visiting and recording GPS coordinates of sites already known from texts, or previous research), as well as intensive pedestrian survey in the area of Agios Ioannis church, an area north of Kampos Marathokampou identified by Graham Shipley as a possible Archaic/Classical site. Extensive survey involved entering ‘previous knowledge’ into a ‘Points of Interest’ (POI) database using standardised forms accessed on tablets through the app KoBo Collect. Although field research was limited to the permitted survey area, bibliographic research was conducted on the whole area of the island west of Karvounis, drawing on the catalogue in Graham Shipley’s A History of Samos, 800-188 BC (1987), then adding further sites based on visits with Georgia Delli and Stavros Kondylis, a local history enthusiast from Marathokampos. The distribution of POIs in the landscape has helped refine plans to target other areas for research in future seasons.

Limitations on time and personnel in 2021 meant that only six team members were available to walk intensively for four days. Given these constraints, intensive survey was restricted to the area of the Agios Ioannis church. This was deemed the priority site for investigation. Work ended by 1pm daily, to allow enough time to finish processing and deliver material to Pythagoreio Museum. Finds were processed on-the-fly in the field. Five field walkers, spaced at 10m intervals, walked 55 50x50m tracts, covering 9.48 ha., counting visible surface sherds and tile and collecting diagnostic sherds and a representative range of wares. One hundred and seventy three diagnostic samples were collected from across 30 tracts and fabric samples taken from 43. Tracts walked were aligned with the 35N UTM grid: a pre-defined grid of the survey region was drawn before fieldwork began, and team members were required to locate grid corners using handheld Garmin GPS units. The field team leader recorded on KoBo Collect terrain and landscape type, surface visibility, vegetation coverage, a quick sketch map and photograph, and features of interest, while walkers recorded their ceramic counts and tract visibilities. One member of the team documented collected samples (mostly ceramic and marble fragments) directly in the field. Points of Interest discovered within the landscape were recorded separately on a form. Tracts areas and walker lines were digitised in GIS at the end of every day, and cumulative spatial statistics were presented to field walkers.

Preliminary analysis of weighted ceramic counts indicates that the highest density of material was in the area of the church, and also terraces to the east and north. A high concentration of material appears to be spreading from an upland area north and west of the current survey zone: this area will be investigated next year. The majority of finds collected were medium or coarse ware ceramics or tile, but in addition some marble and quartz pieces, and one possible stone tool. Most were utilitarian open (kraters) and closed (amphorae and jugs) shapes of medium coarseness, used for storing and carrying food and liquids. Fine wares were rare. Most of the collected ceramics are Byzantine in date, while a small but significant number of diagnostic sherds in the immediate vicinity of the church can be dated to the first millennium BC.

Fig. 1/ Mt Kerkis and the west part of Samos, viewed from the air 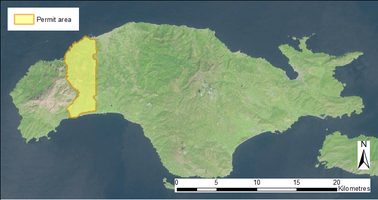 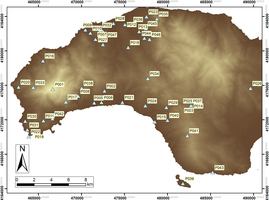 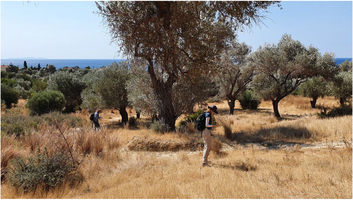 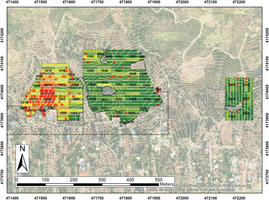 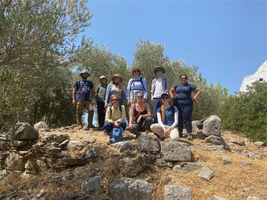