Key-words
Public building - Residence - Plant remains - Public area - Domestic space - Building Type - Material Type - Site Type
Type of Operation
Study
Institution
American School of Classical Studies at Athens
Toponym
Kavousi
Linked Record
20022004200620082009201120132015
Report
Azoria. D. Haggis (ASCSA/North Carolina) and M. Mook (ASCSA/Iowa State) report on the third season of study and site conservation, focused on determining the date of urban transformation and on examining differences in food storage, processing and consumption in domestic and public contexts (Fig 1).
A major transition probably occurred in the early sixth century BC when, following continuous occupation throughout the Early Iron Age and seventh century, a horizon of architectural renovation involves significant changes in the use of the settlement and the organization of public and private space (Fig 2). Novel architectural forms, such as those of the Monumental Civic Building and the putative andreion, suited newly determined civic spaces and institutions, and the large-scale building projects conducted required mobilization and organization of labour. The food storage and processing facilities associated with these two buildings demonstrate changes in the control and mobilization of agropastoral produce for various occasions of public consumption.
Houses built at this time remained unchanged until the site’s abandonment and destruction in the early fifth century. The types of food processing equipment, and the distribution and condition of grain and other produce in the houses, point to the decentralization of storage and primary processing. Households in the city centre were principally consumers; their assemblages reflect final stage processing and consumption (and storage for conspicuous consumption) rather than multiple-stage processing and storage of staples. Olive and vine, well represented in the botanical record, were processed into oil and wine in contexts removed from the locus of consumption. The large urban house represents the centre of a complex oikos, whose dependents, storerooms and work areas were located away from the south acropolis.
The city’s civic buildings show different kinds of resource allocation and dining activities. The Monumental Civic Building (Fig 3) accommodated various kinds of ceremonies. The open plan (Fig 4) encouraged communal feasting in which status distinctions were expressed through the nuances of rituals and ceremonial allocation of sacrificial meat or special meals. By contrast, segregation was the rule in the putative andreion (Fig 5), where a multiplicity of connected but separate dining rooms enabled participants to dine together as part of the civic community, while at the same time expressing corporate or kinship distinctions. The nature of the ceremonies and feasts in these two civic contexts suggests distinct but parallel modes of interaction and expressions of sociopolitical identity in the early city.
Author
Don EVELY
Bibliographic reference(s)
Unpublished field report, American School of Classical Studies at Athens
Date of creation
2011-01-13 00:00:00
Last modification
2018-08-22 09:24:34
Picture(s) 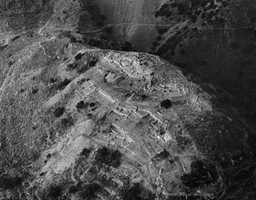 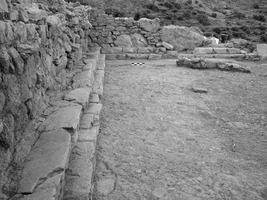 Fig. 4/ Interior of the main hall.