Panormo, Mulopotamos - property of Ch. Eukarpidou. Athina Fraidaki (28th EBA) reports on the excavation of a building of the Byzantine period, excavated from 2007 onwards.

In 2008, the SW part of the building was excavated, revealing a large rectangular room (Room A), of which only the N and W parts were preserved. The walls were made of lightly worked stones, bound with cement. A coin of Phokas (602–610 AD) was recovered on the S side of the site.

In 2009, excavation continued to the centre of the room and to the E. To the E of Room A, a destruction deposit was found. A paved floor was found, as well as an elevated doorway out of the E end. It is possible that the destruction layer was a result of seismic activity in the area. The direction of the wall found in this area was NW, and was typologically similar to walls found in 2008. From the upper surface of the wall, a bronze coin of Constantine II (659–64 AD) was found. Finds included iron nails, some unpainted tiles, a loom weight, traces of charcoal, tiles and animals. Another coin was found dated to 655–8. A Cretan amphora of type TRC 12 was found, as well as a small lamp characteristic of those found across Crete in the sixth, seventh and eighth centuries.

The impression given by the pottery, coins, and other finds of the excavation is that this was a building whose main period of occupation was the mid seventh century AD. It had two main rooms in the NE, an extensive dining area and storage space to the SW along with three courtyards. 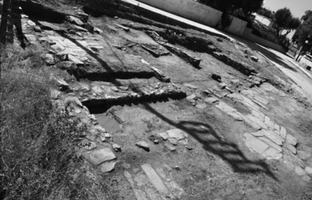