Karaiika, Motorway of Corinth-Patras-Pyrgos-Tsakona, Kilometric position 20+950. Vasileios Argyropoulos reports on the continuation and the termination of a three-year long excavation, which took place where the toll station of Kato Ahaia would be built. The excavation expanded up to 800 sq. meters, and it revealed an ancient cemetery, dated in the fourth century BC.

The first group consisted of seven burials, and they were all cist graves (fig. 1). All the deceased individuals were placed in outstretched position, with their head in the E (except one, whose head was placed towards the W). The grave-goods were placed mostly in predefined placements: the pots were mostly placed between the deceased’s legs, the metal items next to the legs although there were exceptions [mirror and scraper placed near the belly (fig. 2)]. The jewelry was mostly worn.
Amongst the interesting findings of this group are some red-figure vessels: a pelike (fig. 3), a marital levitas (fig. 4), and a hydria (fig. 5). The pelike depicted three youngsters wearing hymatia, and the levitas and the hydria both depicted scenes of a marital preparation. All the vessels were dated in the fourth century BC.

The second group consisted of eight cist graves, two jar-burials and three cremations.
The cist graves were all empty of bones, and the grave-goods were mostly small black-painted clay vessels. Three to five of them were placed close together in each grave (fig. 6). The only exception to this type of grave-goods was a gold leaf and a female figurine, found in one of the burials. The complete absence of skeletal remains indicated that the burials were destined for infants, whose bones were dilapidated due to the soil’s pH. This theory is supported by the types of vessels found (feeding bottles, miniature vessels etc).
The jar-burials were placed in narrow-bottomed pithoi (fig. 7). They were found next to each other, inclined towards the E. One of them contained remnants of child bones and the other (fig. 7) contained infant bones and three black-painted vessels (olpe, small lykithos, and arybbaloid lykithos).
Of the cremations, only one was well preserved. It was a pit, lined with clay, which was fired during the cremation. Some bones that were not completely cremated, parts of burned wood and some vessels were found inside it (fig. 8). Apart from the pottery found (lykithoi), a bronze mirror indicated that the deceased was probably a female.

Eight more burials were discovered in the kilometric position 21+280, about 300 meters away from the late Classical cemetery. They were two cremations, five jar-burials and one tile-roof chamber grave.
The cremations were similar to the well-preserved one of the late Classical cemetery (fig. 9). They were oriented N-S, and they were dated in the late fifth century BC.
The jar-burials were placed in narrow-ended pithoi, with no consistent orientation (fig. 10). Their lid was covered with a stone slab (as was in the late Classical cemetery), and most of them contained no skeletal remains. A female burial containing silver earrings, a golden periapton, a bronze mirror, a red-figure pyxis (fig. 11) and a silver Olympia coin (c.363-323 BC) was the most luxurious one.
The tile-roof chamber grave was covered by Laconic stroter tiles. It was completely empty inside and it was considered to be an infant burial (thus, the skeletal remains dilapidated). 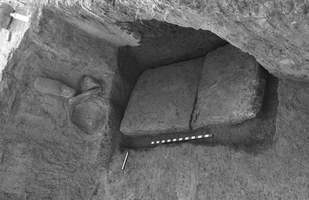 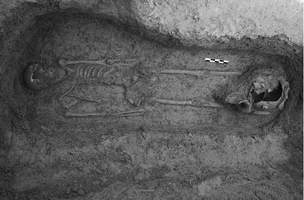 Fig. 2/ Cist grave no. 6 after the removal of the covering slab 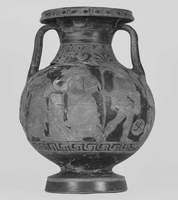 Fig. 3/ Red-figure pelike (fourth century BC) from cist grave no. 5 Fig. 4/ Red-figure levitas (fourth century BC) from cist grave no. 6 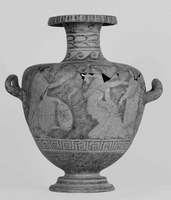 Fig. 5/ Red-figure hydria (fourth century BC) from cist grave no. 6 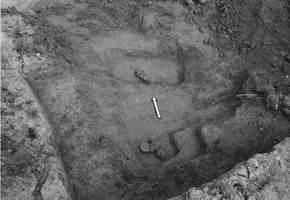 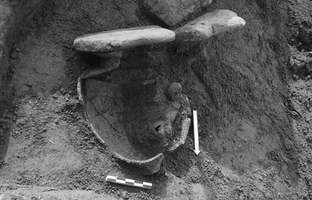 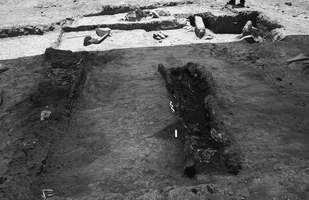 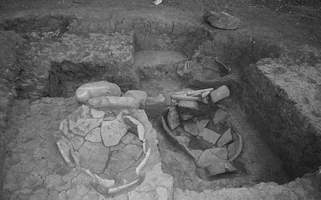 Fig. 9/ Cremations K1 and K2 (outside the cemetery) 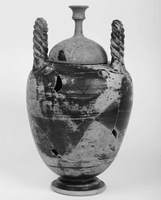 Fig. 10/ Cemetery of pithoi, shot from the N 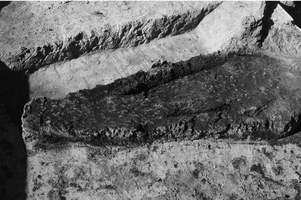