Anemomylos site, Vrachnaiika, Patras. Vasileios Argyropoulos (ΣΤ’ ΕΠΚΑ) reports on the excavation held due to the construction of the main pipe of the dam of Peiros-Parapeiros. In the aforementioned site, the excavation had started the year before, and it was continued this year, following the construction of the main pipe, towards the W. New architectural remnants were revealed this year, which were possibly part of the same late Classical-early Hellenistic coastal settlement (fig. 1,2).

Building E2 (fig. 3,1). This building was revealed very close to building E1. It contained two spaces, its foundations were made of large limestone or flint slabs, and its walls were made of unworked stones.
A circular construction made of brickwork was located inside space no. 1 (fig. 4). Its diameter was formed of large same-size slabs, which were connected with Z-shaped hinges. The purpose of the construction had not been made clear.
Pottery and three bronze coins that were found date the building between the fourth and the third century BC. A corner tile, decorated with flowers, from the building’s roof was dated in late fourth century BC (fig. 5).

Large amounts of pottery dated in the fourth century BC was located in a narrow space between buildings E2 and E1. It must have been used as a disposal area. The pottery found was mostly sherds of handles and bases of black-painted skyphoi, sherds of plates, one Ilia likithos etc. The most important findings were considered to be part of a female figurine, on whose head was drilled a suspension hole, and a sherd of a completely drawn plate. The word ΑΠΟΛΛ was engraved on its external side and it was possibly the owner’s name.

Building Z (fig. 2,6) was located less than hundred meters away from complex E. Its south side and parts of three rooms were gradually revealed. One of the areas’ floor was made of off-white mortar, smothered on top of pebbles, while a shallow edging round was running along the walls. A flower-decorated hegemon, dated in the late fourth century BC ,was found outside this building, and several bronze hooks and fishing materials were found inside it, perhaps indicating the residents’ occupation. Furthermore, the pottery found was dated between the fourth and the third century BC, and three bronze coins found were dated in the early Hellenistic times.

Part of an ancient street was located between the buildings E2 and Z. It was oriented N-S (fig. 2) and its edges were defined by medium-sized stones. It was made of stepped soil and pebbles, and sherds of late Classical and Hellenistic times were discovered in it. Furthermore, a bronze coin of emperor Galliinus (253-268 AD) was found, indicating that the street was in use at least until the late Roman times. 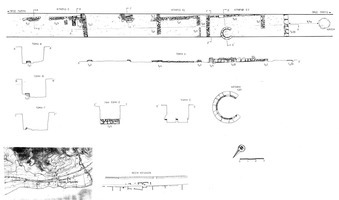 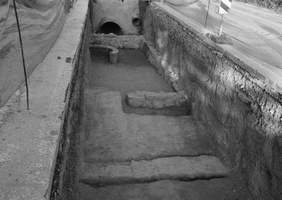 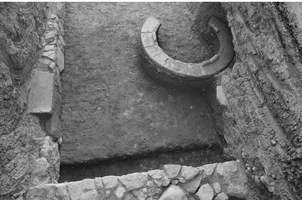 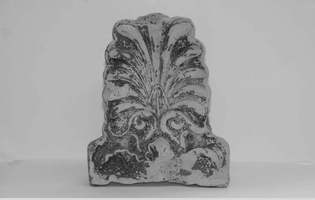 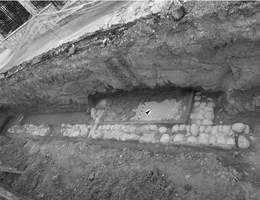