Key-words
Figurine - Tools/weapons - Dress and personal ornament - Cemetery - Find Type - Site Type
Type of Operation
Excavation - Rescue excavation
Institution
Ministry of Culture and Tourism: ΙΒ' ΕΠΚΑ
Toponym
Kalligonio
Linked Record
2000
Report
Area of Megali Vrysi, M. Stavraka property. G. Pliakou (ΙΒ' ΕΠΚΑ) reports the discovery of a peribolos, eight graves and three reburials on the eastern slope of the Katharia hill, close to the area on its southern slope where a large section of the north cemetery of the ancient city has been found. (Fig. 1: site 3; Fig. 2).
Five of the graves and the three reburials were found inside the peribolos, and the other three outside. Outside the peribolos was a further retaining wall, with a passage between it and the peribolos. Four of the burials were cist tombs, two were tile graves, one a limestone sarcophagus and one a pit grave. The cists were built of hard limestone slabs, in one case including re-used grave stelae. The tile graves included re-used tiles marked ΔΑ. Two of the reburials were made in a simple pit-like opening defined with a row of stones: the third was included in the sarcophagus to the side of the main burial. Between the graves was an offering place with traces of burning and with broken pottery set on cover tiles. Most tombs were oriented northwest-southeast, apart from the tile graves which were east-west. Two of the cist tombs held child burials. One, of a boy, had two terracotta figurines, a doll, one iron and one bronze strigil and many astragaloi.
Among the other tombs, one female cist burial had, apart from pottery, a silver pin and a bronze mirror. The grave goods date the tombs to the Late Classical and Hellenistic periods. In the fill above the level of the tombs were fragments of two stele bases.
Author
Catherine MORGAN
Bibliographic reference(s)
ADelt 55 (2000) Chr, 579−80
Date of creation
2011-01-09 00:00:00
Last modification
2018-08-22 09:24:34
Picture(s) 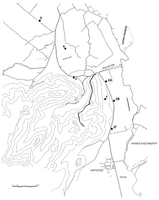