Acropolis of Orchomenos, Orchomenos. Stamatis Phritzilas (ΛΘ’ ΕΠΚΑ) reports on excavations conducted on the Acropolis of Orchomenos.
Parts of the fortification wall NW of tower 7 were examined. The wall had a surface of large carved blocks and was filled with rubble masonry. A tile was found, inscribed with the initials ΔΑ(ΜΟΣΙΟΥ) (Fig. 1).

Parts of public or private buildings were excavated, built on terraces supported by retaining walls which were an adjustment to the irregular landscape of the slopes of the Acropolis. A monumental retaining wall of irregular polygonal masonry was found and exposed. It dates on the classical era (fourth century BC) (Fig. 2). The importance of this find led to the excavation of the nearest terrace, where parts of a public building possibly used for the accommodation of a garrison were exposed (Fig. 3). A well was found in the open-air space of the building. Other notable finds included coins, dated on 340-300 BCE (Fig.4a-b) and a silver Corinthian drachm of the first half of the fourth century BCE, parts of a pipe and skyphoi sherds with relief decoration from the Hellenistic destruction stratum (3rd Ct BC). (Fig. 5). Notable examples of these bear Dionysiac themes.

Work continued in the rainwater drainage system of the theatre, where the stepped stone pipe was fully exposed. (Fig. 6,7) The drainage system included smaller pipes. Hellenistic pottery with Dionysiac themes was also found in the theatre. (Fig. 8,9)

Excavation continued on the North Stoa to expose the south euthynteria. The removal of the surface stratum in the W part of the stoa revealed a destruction layer and the bedrock under the foundations.

The altar Ε of the temple of Artemis Mesopolitis was cleared and examined. Τhe most important discovery being the numbered blocks, bearing inscribed letters of the Greek alphabet, a guide to construction. The letters’ style aids in the dating of the altar between the fourth and the third century BC. Inside the altar, a series of blocks adjoining the interior front of its Ε side pointed to an earlier phase (Fig. 10). The construction of the altar followed the retaining wall of the terrace of the sanctuary of Artemis which was probably built in different phases, as its lower and upper parts consist of ashlar and polygonal masonry respectively (Fig. 11). 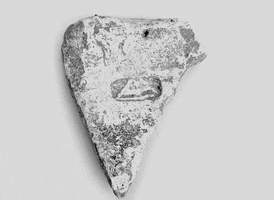 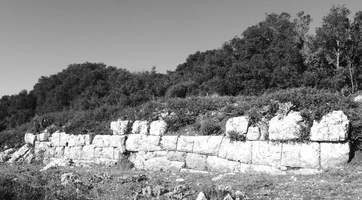 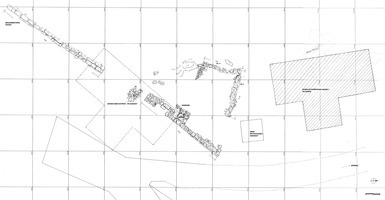 Fig. 5/ Detail of the presentation on a Hellenistic vase with relief decoration

Fig. 6/ Plan of the drainpipe of the theatre koilon

Fig. 7/ Cross section of the drainpipe of the theatre koilon Fig. 8/ Hellenistic sherd with a Satyr from a Dionysian thiasos/troupe 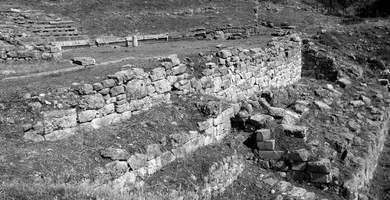 Fig. 9/ The walls of the theatre scenae after the cleanings