Furthermore, the excavation research at the Mycenaean settlement of the kilometric positions 1+690-1+740 was continued.
In this area (kilometric positions 1+570-1+625), nine rectangular stones were found, which were sepulchral signs. A finely constructed sepulchral monument (a pedestal, which was accessible by steps) was also found (Fig. 1).  In the same area, a highly important cemetery of the Archaic times (seventh-sixth century BC) was excavated.

The northern part of the cemetery was not located, as this area was not excavated (Fig. 2,3).  There were many roman burials which have disturbed the upper layers of the archaic burials, without destroying them. At this section, three stone sarcophagi were found; one of them contained large amounts of Oriental style pottery, as grave-goods. The pottery was located both inside and outside the larnax. The burial gave the impression of a tomb, but the earth accumulations were naturally stored due to the ground’s inclinations.

The graveyard was examined into in three zones (E-W), which were as follows : the S zone, the N zone and the middle zone.  In the S zone (S of the sepulchral monument) there were 22 burials 13 of which are sarcophagi, two of which were chamber tombs, six of which were jar-burials, and one of which was a plain pit. The vessels used for the jar-burials were mostly kraters, commercial-use amphorae and cooking ware. The grave-goods consisted of pottery and some iron pins, although an impressive faience scarab was also found. The burials of the middle zone were 7, all of which were in sarcophagi. A bronze vessel (levitas) was revealed in one of them, sealed with another, smaller bronze vessel (tank); the two vessels were held together with metal strings, possibly because the levitas contained a wooden box with the deceased individual’s bones (Fig. 4,5). The grave-goods in this burial consisted of perfume vessels (small arivalloi). Finally, the N zone there were 16 burials, ten of which were sarcophagi and six of which were jar-burials.

It’s important to mention that there were child burials (Fig. 6) at the N zone, which contained impressive pottery (perfume vessels mostly).

E of this cemetery an important underground chamber tomb was revealed (fig. 7-8) which was located at kilometric position 1+580 and dated in the Roman times.

Initially, the road of the tomb was revealed, and its inclination was vertical (fig. 9-10). Two tiles were found immured inside the side walls. They were decorated with engravings of mythological nature. The E tile was destroyed, whereas the W tile was intact; a male charioteer of four dolphins, which were chased by a sea monster was depicted in it.

This burial was dated to first century A.D. and was in use at least at the end of second century A.D. Inside the burial chamber, the walls were decorated with arched conchs (cubiculi). Three larnaxes were revealed, arranged in a Π shape, in a deeper level of the chamber-burial.

The E larnax, oriented S-N, contained a large number of bones and eight skulls.
The N larnax, oriented E-W was plundered, and in it only one oil-lump, six copper coins and few pottery were found.

All the walls of the chamber had painted decoration, in ultramarine and red colour. The paintings were frescoes, and they were well preserved. Festoons painted in green, with seeds hanging from them were painted on each wall of the chamber. At the center of the drum of the N wall a male figure who wears a white toga was depicted (fig. 11), as well as the face of a woman in the W wall (fig. 12), and a bearded figure in the S wall (fig. 13).

Finally, the examination of the Mycenaean settlement was continued in kilometric positions 1+690-1+730 (fig. 14) and it revealed new areas. A cemetery of cist graves, which date to Mycenean period was located in this area (fig. 15-16). The existence of the burials was known to the habitants of thirteenth century A.D. , because in the most cases these burials were found in areas uncovered  by buildings, thus they were purposely avoided. A burial of a young individual, oriented N-S was particularly interesting, due to the grave-goods: small amphorae, six gold flowers (to be sewed on a textile diadem), many beads of different kinds, a clay feeding-bottle. 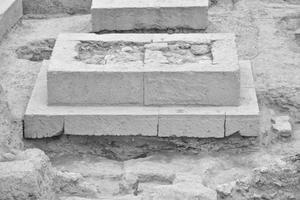 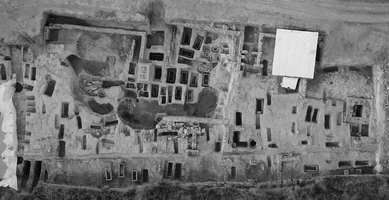 Fig. 3/ View of the excavation 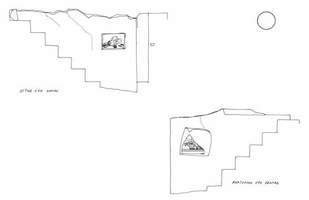 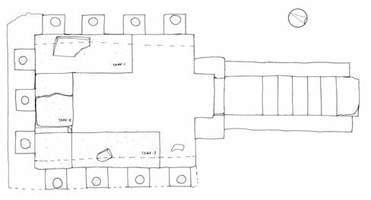 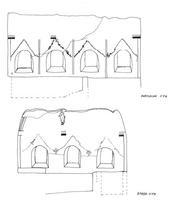 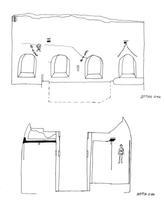 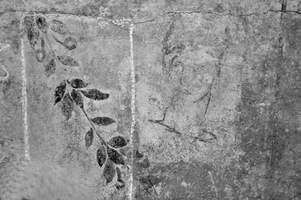 Fig. 12/ Depiction of a woman’s face in the W wall

Fig. 13/ Depiction of a bearded individual in the S wall 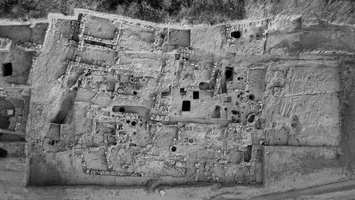 Fig. 14/ View of the Mycenaean settlement. Trenches dated in the Middle Helladic and Late Helladic times were visible 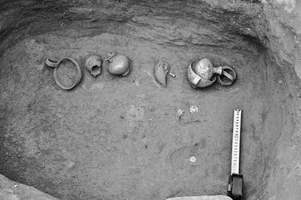