Key-words
Public building - Domestic space - Road system/waterway - Building Type - Site Type
Type of Operation
Excavation - Rescue excavation
Institution
Ministry of Culture and Tourism: Στ' ΕΠΚΑ
Toponym
Nafpaktos
Linked Record
2000
Report
Naupaktos, Papachristopoulou Street (A. and K. Papadokostaki property). (Fig. 1). Ph. Saranti (then Στ' ΕΠΚΑ, now ΛΣτ' ΕΠΚΑ) reports the discovery of architectural remains chiefly of the Late Roman/Early Christian and Hellenistic periods (noting that the plot continued in use into the Ottoman period).
Late Roman to Early Christian walls are generally north-south in orientation and have red cement. (Fig. 2) Associated with them in different parts of the plot is a thin layer of fine pebbles generally at around a depth of 2.1m. A long brick and stone wall, which runs across the entire plot and continues beyond it, belongs to a major Early Christian building and incorporates architectural spolia. Its three doorways had all been blocked; at the northwest end is a large roofed space, and there is also an open courtyard off it. In general, walls of this period make extensive use of earlier architectural remains (columns, stele bases, threshold blocks, etc.).
Hellenistic landscaping (0.5−1m below the Late Roman to Early Christian levels) used fill containing material of earlier phases (back to the fourth century BC at least). (Figs 3-4). Hellenistic remains were largely confined to the northern part of the plot, and consisted of an ancient road and the roadside buildings which flanked it during its second building phase. The northeast building was carefully built of stone blocks, with an entrance taken out of use in the second phase. It had a tiled floor, a well with part of a pithos as the stomion, and a large pithos set on a base with lead clamps. The northwest building was a poorer structure and its western part was allowed to fall into ruin. A monolithic column probably belongs to its interior. The south roadside building was a simple construction with at least two interior spaces, in one of which was an open conduit leading to the road. The building was severely damaged by two large post-Byzantine deposits which contained rubbish, traces of burning, sherds, stones and shell.
The road was traced east-west for a length of 9m (4.5m wide). Two phases were observed, the older, Early Hellenistic, being contemporary with the roadside buildings. The final surface was of pebbles, beaten earth, tile and parts of destroyed floors; the part of the road in contact with the north building was paved, with a small terracotta round well set into it. An extensive destruction deposit, containing whole tiles from the roadside buildings especially on the south, was found across the final surface; contemporary with the last phase was a covered waste channel which cut across the road (many of the cover slabs were in secondary use). In the older phase, a smaller water channel running north-south brought water from inside the north building into a square well/shaft in the middle of the road. This is probably a main road between the centre of the Hellenistic city and the harbour.
Author
Catherine MORGAN
Bibliographic reference(s)
ADelt 55 (2000) Chr, 330−33
Date of creation
2011-01-08 00:00:00
Last modification
2018-08-22 09:24:34
Picture(s) 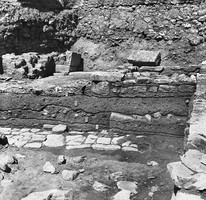