Key-words
Altar - Tomb - Figurine - Lamp - Numismatics - Religious building - Domestic space - Road system/waterway - Building Type - Find Type - Site Type
Type of Operation
Excavation - Rescue excavation
Institution
Ministry of Culture: Η' ΕΠΚΑ
Toponym
Corfou, Corcyra, Corfu, Korfu, Kerkyra
Linked Record
20002000 (1)20012001 (1)2001 (2)2002
Report
Corfu-Kanoni road (Pachi property). A. Vaxovanou (Η' ΕΠΚΑ) reports on finds covering a long span from the Classical to Byzantine and modern period. Four architectural phases were revealed, from Classical to Roman. (Fig. 1). The last, Roman, phase includes sections of crude stone-built walls. The fragmentary nature of the remains could be associated with the destruction of the city by Agrippa, prior to the battle of Actium in 31 BC.
The earlier, Hellenistic, phase shows the transformation of the Classical city plan. In the east of the plot, various walls and structures included a building with at least three rooms, a structure with a hard plastered floor of undefined function and a cist grave with a tile cover containing a single inhumation without grave goods. In the west of the plot was part of a street, 5m wide and running southeast-northwest, with buildings on both sides (walls and floors were excavated, plus one mosaic floor). Pottery included late fourth to second-century BC plain and decorated wares, unguentaria, terracotta figurines, a stone altar and bronze coins (300−229 BC).
The two earliest, Early and Late Classical, phases had more carefully built walls with deeper foundations. A street, with parts of walls and floors on either side, was uncovered in the east of the plot; this was gradually abandoned as residential space expanded in the following phase. In the west there was evidence for filling and levelling of the surface with stones and tiles. Numerous finds include black-figure and red-figure pottery, fifth-century amphora types, as well as incense burners and ceremonial lamps and a bronze coin of 430−330 BC. A total of 124 coins were found during the excavation and a large number of loomweights, reflecting the domestic character of the buildings.
Author
Catherine MORGAN
Bibliographic reference(s)
ADelt 55 (2000) Chr, 644−47
Date of creation
2011-01-08 00:00:00
Last modification
2018-08-22 09:24:34
Picture(s) 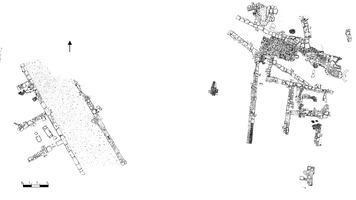