Figareto (property of D. Chalikiopoulou). The foundations of eight walls built in dry stone and roof tile, plus a mosaic floor were found. The remains are too fragmentary to determine the building’s function. Limited finds include black-glazed pottery and five coins (two of which date between 229 and 248 BC).
Nausikas Street (O.T. 610, Konofaou A’ property). Further excavation was undertaken of a Hellenistic to Late Roman building complex, seven rooms of which were revealed in 1999 and 2000 (Figs 1-2). An amphora storeroom (I) was found (Fig. 3) and another room (II) contained the base of a large pithos with lead clamps. Residues of pine resin were identified inside it. The largest room (IV) contained a paved area of densely-packed tiles and mortar. Next to it, a well-built rectangular structure held a pithos or lekane for the storage of liquids (possibly wine). In the opposite part of the room, a built semicircular construction was probably a furnace or kiln (Fig. 4). The finds suggest that the complex was a small-scale workshop for processing resin, a necessary ingredient of wine. Dating of the pithos by the NCSR Demokritos places the peak of activity in the Roman period (AD 4−83). Seventy coins were recovered, mostly worn, of which five date to 229−48 BC and one to 400−300 BC. Finds also include three fragments of clay altars, three loomweights (two lead and one terracotta and inscribed), iron nails and numerous sherds of cooking pots of various sizes. The head of a Hellenistic male terracotta figurine in the foundation of a wall provided a terminus post quem for this part of the complex, while a fragment of a third-century AD Corinthian relief bowl gave a terminus ante quem. A prehistoric flint tool and a stone axe in the upper part of the excavated deposits indicate a prehistoric site in the area, possibly within the limits of the Kanoni peninsula.
On the adjacent plot (Konofaou B’ property), parts of two buildings were separated by a street, with a thick ancient fill.
Vrysoula (S. Vlachou property). Two parallel walls separated by a dense deposit of sherds, tile and stones, which is probably the substratum of a street on the same orientation as that on the Konofaou B’ property, were located. This would connect the higher parts of the ancient city in the east with the Yllaiko harbour to the west. A row of structures beneath the street was probably part of the central sewer of the city. Various remains across the plot including a floor with a hearth and a well. Most of the pottery associated with architectural remains dates to the Classical and mainly Hellenistic periods, while Archaic material was found in the deepest soundings.
Nausikas Street (Th. Souli property). A construction partially unearthed west of the street in 1992 was further revealed, without shedding light on its function.
Nausikas Street (Catholic archdiocese property). A number of structures east of the street range from Archaic to Late Classical/Early Hellenistic in date (Fig. 5). Initially a small stream ran through the area. During the Archaic period, a dam was constructed, the stream filled and a small building erected next to it. Due to the steep slope, a terrace wall was built which incorporated part of the city’s central sewer (in use into the Late Roman period). In Classical times, a new terrace wall was erected above the old one. Abundant Archaic and Classical sherds include Attic imports (e.g. a black-figure krater rim, ca. 530−520 BC, with ivy on the exterior and a trireme stern inside). Other finds include fragments of small solid terracotta figures of the known Corfiot type of standing Artemis, as well as unfired clay and kiln wasters, nine bronze coins, a bronze object possibly representing a bed, iron and bronze arrowheads and an iron spearhead, and a small blue-green glass bead. These suggest a sanctuary, although the kiln wasters and raw clay may be connected with a workshop.
Doukaki property. Important remains of the earliest settlement have previously been uncovered here (ADelt 20 [1965] Chr, 392; ADelt 42 [1987] Chr, 337−40; ADelt 43 [1988] Chr, 340−42). The density of the walls (nine were uncovered) and high frequency of pottery are characteristic: Archaic to Roman finds include coarse monochrome pottery, moulded bowls, black-glazed and thin-walled painted vessels, as well as Hellenistic bronze coins.
Mavriki O.E. property. Limited architectural remains (parts of three walls) and Hellenistic pottery were found.
Rarri property, next to the Church of Agia Paraskevi. Trials within an existing building revealed part of a tiled floor and abundant pottery, including many lamps of various types (noting 642 handless miniatures). South of the building was a clay floor with an incomplete column drum immediately beneath it. Associated finds are mainly lamps, miniature vases, black-figure pottery and figurine fragments, as well as the bronze base of a mirror (a lion with human legs on its back). In the west of the plot was a deposit mainly of lamps (1,125 examples, whole and fragmentary), as well as figurines, miniature vases, Archaic pottery, black-figure sherds and bronze jewellery. The assemblage is Archaic in date. The lamps span around a century, had all been used and include ceremonial types (Figs 6-7).
Ch. Ioannou property. Walls and floors of four architectural phases were located (Fig. 8). The earliest, Late Archaic, phase is associated with analogous finds from the neighbouring Orfanos property (ADelt 51 [1996] Chr, 412−13, plan 6) where a ship-shed was previously revealed. The remains of the following two, Classical, phases were connected with coastal installations due to their sturdy construction and connection with analogous finds from the neighbouring Georgara property (ADelt 53 [1998] Chr, 522−23). The final Early Hellenistic phase produced only one wall.
Author
Catherine MORGAN
Bibliographic reference(s)
ADelt 55 (2000) Chr, 635−44
Date of creation
2011-01-08 00:00:00
Last modification
2018-08-22 09:24:34
Picture(s) 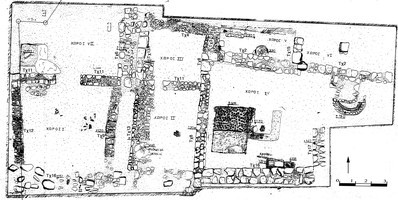 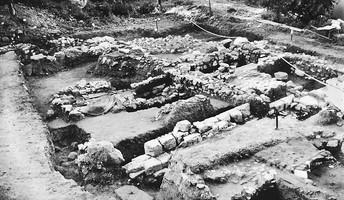 Fig. 2/ Figareto, Konofaou A' property: general view of the excavation. 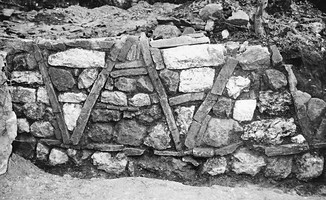 Fig. 3/ Figareto, Konofaou A' property: east face of south part of wall 12 of room I. 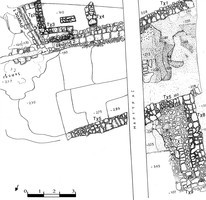 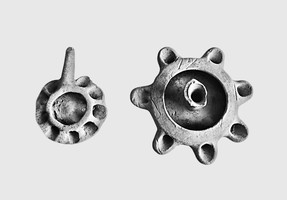 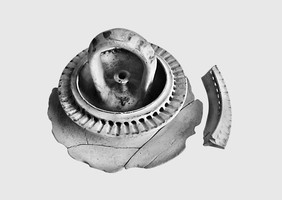 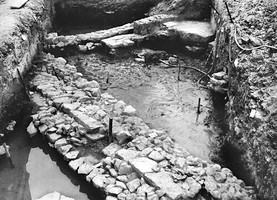