I. Metaxa Street (I. and G. Philippatou property). Six looted Hellenistic and Roman tombs (four cists and two tile graves) were found on a plot where tombs have previously been excavated (see ADelt 40 [1985] Chr, 146−47). Three fragments of marble sculpture were recovered from the debris of landscaping: a hand, part of a male head and a section of drapery (Fig. 1). Classical red-figure and Hellenistic sherds were also found.

Souedias Street (parallel to I. Metaxa Street). Widening of the street caused the destruction of seven tombs (gold leaf, lamps, bronze coins, etc. were collected from the spoil): ensuing rescue excavation has to date revealed 50 Classical, Hellenistic and Roman tombs. Given the longevity of the cemetery, there is no consistent arrangement of graves, just successive levels. Most are tile graves (Fig. 2), with eight cists (six of limestone slabs and two of Corinthian tiles: Fig. 3). Reburial, common in the Hellenistic and Roman periods, is chiefly encountered in the stone cists. Classical tombs, by contrast, have one or two interments, dependent on their form. Cremation was also known on a limited scale; enchytrismoi of infants and children in amphorae or pithoi was common. At the southern edge of the plot was the burial of an animal in a tile grave, accompanied by loomweights. Finally, piles of bones at several places in the cemetery likely came from earlier burials destroyed by later tombs. The tombs contained rich goods, including gold and silver jewellery, silver and bronze coins, bone pins, and glass and pottery vessels.

Ancient Same had three cemeteries to the east, west and north. Present indications are that the west cemetery is bounded to the west and east by Metaxa and Souedias Streets, and to the south and north by the Health Centre and telephone company (OTE) building respectively. Funerary periboloi, Hellenistic and Roman gravel paths, architecturally impressive tombs and rich goods combine to indicate an extensive and important cemetery extra muros (see previously ADelt 34 [1979] Chr, 266; ADelt 35 [1980] Chr, 199−200; ADelt 40 [1985] Chr, 146−47).
The east cemetery lies on the hill of Ag. Phanedon (Kyatis), the second acropolis of the ancient city. Tombs here seem limited in number and looted. The north cemetery, also extra muros, is at Tseka; few tombs have so far been investigated here. Additional graves have also been found in other locations such as Palioura and Kaloirolongo.
Author
Catherine MORGAN
Bibliographic reference(s)
ADelt 55 (2000) Chr, 337−39
Date of creation
2011-01-08 00:00:00
Last modification
2018-08-22 09:24:34
Picture(s)

Fig. 1/ Sami, I. Metaxa Street: section of drapery from a marble statue. 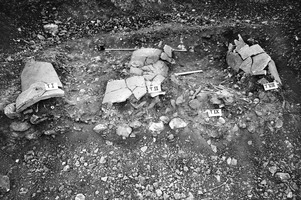 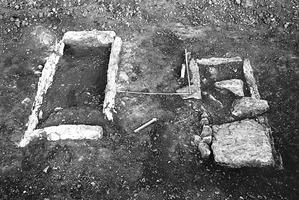