Key-words
Temple - Sculpture - Religious building - Sanctuary - Find Type - Building Type - Site Type
Type of Operation
Excavation - Research excavation
Institution
Ministry of Culture and Tourism: Στ' ΕΠΚΑ
Toponym
Aigion, Vostitsa
Linked Record
200020082012
Report
Trapeza. A. Vordos (Στ' ΕΠΚΑ) reports on the 2000 excavation season in the temple (see previously AAA 32−34 [1999−2001], 149−60).
The north long side of the building had 15 adjoining stylobate blocks of varying length (up to 1.83m) and width (1.16−1.22m) (Fig. 1). The south edges of a number were tooled, perhaps to engage the pteron blocks − all are sandstone with a 0.1m wide band of anathyrosis.
The east side is preserved to the height of the euthynteria foundation. Only three euthynteria blocks survived modern quarrying in this area. The east and north sides interlock on the corner. (Fig. 2). In contrast with the blocks of the overlying courses, they are of local conglomerate roughly worked with a small pick. The blocks of the exterior face of the northeast corner have not been found, but the exposed area beneath indicates that the corner was founded on trimmed bedrock. The temple foundation is ca. 16.72m x 31.56m, making it a hecatompedon close in dimension to the Temple of Poseidon at Ermione.
Inside the temple were parts of the north and east wall of the sekos and of the foundation of the wall between the pronaos and sekos. The north wall of the sekos, 2.1m from the stylobate, consists of an 8.63m long row of sandstone
blocks at foundation level. The pteron was probably paved, although only the plaster underlay is preserved. The structure overlying the north wall of the sekos forms part of the toichobate from which two blocks are preserved in situ; one bears traces on its upper surface of the setting of the orthostates, and of the floor of the pteron (a ridge was cut along its length to accommodate the paving slabs) and of the pronaos (where their underlying course is also preserved).
The east and north walls of the sekos bond. (Fig. 3). The foundation of this east wall, a double row of sandstone blocks, is traced for 4.56m, and that of the sekos-pronaos (a series of stones set on their sides, 1.32m wide at most) for 4.2m. The depth of the pronaos is thus established at 4.1m (the distance between the foundations of the two walls). A lime plaster substrate for a floor visible in the scarp may be that preserved over the entire area of the pronaos.
Present evidence indicates that the temple was built towards the end of the sixth century BC. It occupies the flat part of the plateau, leaving an open area to the east before the terrain slopes down, on which the altar was likely located.
Portable finds include parts of the sculpted decoration of the temple, horse legs and hooves in sandstone, a terracotta foot probably of a sphinx and many fragments of roof tiles.
There is as yet no evidence for the deity worshipped, although given the position of the temple in the heart of the fortified city, a poliad deity is likely. The identity of the city is also uncertain in the absence of unequivocal epigraphical evidence.
In 2009, press attention was drawn to the discovery of the sculpture of the west pediment of the temple. Armed warriors and a figure of Athena indicate a battle subject, perhaps a gigantomachy.
Author
Catherine MORGAN
Bibliographic reference(s)
ADelt 55 (2000) Chr, 324−26; Ethnos (24/11/09).
Date of creation
2011-01-07 00:00:00
Last modification
2018-08-22 09:24:34
Picture(s)

Fig. 1/ Trapeza: stylobate from the east. 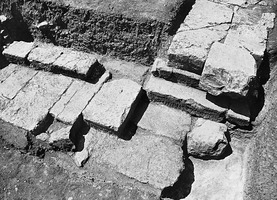 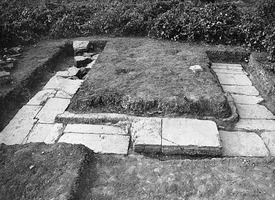