Thouria. X. Arapogianni (ASA) reports on excavations of the skene of the theatre, which measures 21.50m long and is 7.80m wide. The walls are preserved at a height of 3.15m.

On the floor of the skene there are three grooves, and the route for rolling painted scenes is 48m long. The NW part of the external wall of the skene has four struts, spaced at 3.80m intervals.

In the SW area, the a plaster-lined well which would fill with water run off from the semi-circular orchestra. It had an internal diameter of 1.15m, and the upper part of it was defined by four stones, which gives a diameter of 1.58m. No similar wells have been found elsewhere. 4.5m below the surface, the diameter of the well did not change. Inside, sherds of the Hellenistic and Byzantine periods were found, animal bones, and pieces of iron.

To the N, higher up the hill, full and partial remains of seats were found, in situ and dislodged.Four tiled-roof graves were found in this area without coverings, all of post-antique periods. At the place of the graves at the lowest level, a significant quantity of Middle Helladic pottery was found.

S and SW of the theatre and a little distance away, a large building was discovered, constructed from large stones. The west wall was preserved at a height of three stories, and a length 23.50m and the S wall was found at a length 5.60m.

Another building was found in the same area, measuring 3.15 x 4.80m, with a floor made of testaca spicata. The building is a bathhouse of the Late Roman period, from which in other parts walls survive up to 2.50m long, and to the W, a curved lintel of the Roman Imperial period, which indicates the entrance of the praefurnium. Among scattered finds are pieces of tegula mammata and clay discs.

The ancient quarry, the stone from which buildings of Thouria were constructed, was found on a hill N of the excavation area, at the Prionista site. 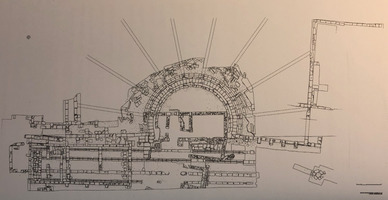 Fig. 2/ Skene of the theatre, view from NE 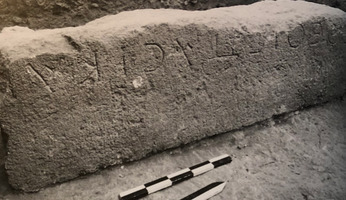 Fig. 5/ Part of the inscribed epistyle 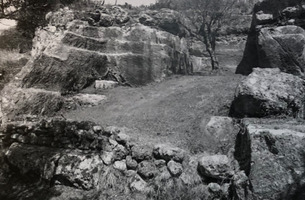