Omagyriou Dios Street: walls of field-stones beneath a layer of tile, running east-west, were encountered at several points along the street. A well at the west end contained second-century BC pottery, a lamp, a disc loomweight and a terracotta antefix.
13 Lysiou Street: the corner of a Roman building.
Megalou Spilaiou Street: at varying depths and locations along the street were a Hellenistic wall, part of a Late Roman building and the fragmentary remains of two further walls.
127−35 Odysseos Street (previously Agion Apostolon Street): three tile graves, oriented north-south (with a few sherds in the fill), and an empty brick-built cist grave on the same orientation.
62 Agiou Alexiou Street: a northwest-southeast wall bordering to the east a well at the junction with parodos Ag. Alexiou.
49 Agion Apostolon Street: the wall of a funerary peribolos just west of the entrance to the precinct of the church of the Ag. Apostolon. Inside (west of) the peribolos, a limestone sarcophagus (oriented northeast-southwest) with a cover slab had been robbed: in the fill were Early Hellenistic sherds, lamp fragments and a gold danake. A similar tomb of the same group was previously excavated (see ADelt 45 [1990] Chr, 138). (Fig. 1).
Nikolaou Plastira Street: a dense concentration of antiquities along this street. (Fig. 2). Architectural remains − chiefly sections of wall of various periods, also tile and pebble flooring and destruction deposits − were found mostly on the left side of the street, with Hellenistic and Roman tombs from the city cemetery on the right. In one instance, a soft limestone Ionic capital preserving geison footings from a building or funerary monument was re-used in a wall. Two cement-lined cisterns were located outside Plastiras 84. At number 94 was the brick-built firing chamber of a Roman kiln (2.1m estimated diameter, 1.94m preserved height; the floor had not been located when excavation stopped), as well as the stomion of small worked stones and lime plaster. A layer of burnt clay surrounded the kiln, especially on the north side.
Twelve tombs were discovered. Four were Hellenistic cists of limestone slabs, oriented north-south: one contained two amphorae and a fragmentary bronze strigil; the second (which had been robbed) an amphora, an unguentarium, a skyphos and many bronze nails; and the third, two amphorae. An enchytrismos lay close to the first of these graves. The fourth was looted and reused during the Roman period: inside were fragments of glass vessels, iron nails, a Hellenistic ceramic unguentarium, a bronze spiral arm-ring and a bronze mirror, and outside were gold jewellery attachments and a danake, and a glass tear-bottle. Three further damaged cist tombs of the same construction and orientation are likely also to be of Hellenistic date: one contained a bronze coin.
The remaining tombs are all Roman in date. Two are brick-built cists with no grave goods. At number 67, the south side of a Roman tomb, with a brick-built vault, stone walls and a beaten-earth floor, was visible in the scarp but not excavated. Two monumental tombs incorporated spolia probably from earlier funerary monuments: one has a geison block with mutules as a cover (Fig. 3), an architectural member with two half-columns at the west side and, at the north side, a slab with a relief ivy leaf. The other incorporated part of a fluted column drum: it contained many glass vessels (mainly unguentaria), part of a bronze chain, three bronze rings, a bronze mirror, gold sheet, a bone pin, iron nails probably from the wooden bier and a prochous, plate and unguentarium.
Author
Catherine MORGAN
Bibliographic reference(s)
ADelt 55 (2000) Chr, 320−24
Date of creation
2011-01-07 00:00:00
Last modification
2018-08-22 09:24:33
Picture(s)

Fig. 1/ Aigion, 49 Agion Apostolon Street: the two tombs and part of the peribolos from the south-west. 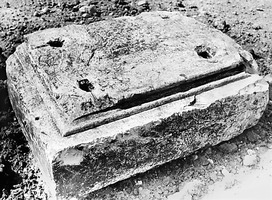 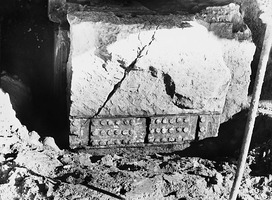 Fig. 3/ Aigion, 65 Nikolaou Plastira Street: geison block in secondary use as the cover slab of a Roman tomb.